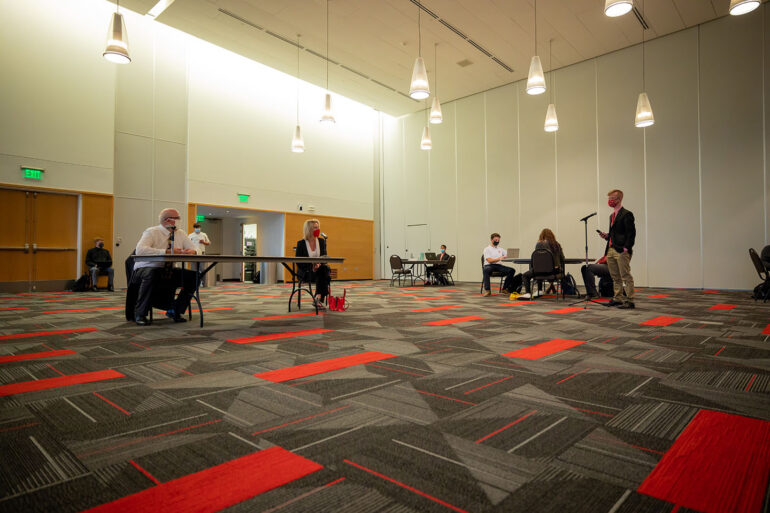 President Gestring spoke about the completion of the DakotaDome renovation and the continuing renovation of the National Music Museum.

O’Kelley said while case numbers for USD are higher than other institutions, it isn’t necessarily cause for concern.

“Our numbers are higher than some of our sister institutions are,”  O’Kelley said. “That’s a good thing, we’re identifying the students that are sick at a much greater rate.”

Senators asked Gestring and O’Kelley how USD was working to slow the spread of COVID-19, including efforts to combat party culture and ways to deal with student hospitalizations or even potential deaths.

“There have been conversations with sororities and fraternities and I’ve been very pleased that they are taking this very seriously and I appreciate their cooperation,” Gestring said. “We certainly thank the food and beverage establishments for this last weekend, for sacrificing some of their most profitable hours of the weekend.”

Gestring said that while the university wants students to socialize, they want them to do it safely. This includes following distancing guidelines, wearing masks and regularly washing sanitizing hands according to CDC protocols.

SGA continued deliberation of a bill to address requirements for third party fundraising for student organizations. The bill would allow funds allocated by SGA for fundraising purposes to be used for third-party organizations or purposes, which would be subjected to yearly audits by the Student Affairs Committee.

The first of the new bills introduced would allow senatorial candidates to actively campaign, setting maximum expenditures and areas of allowed expenditures.

SGA’s first proposed resolution of the semester is in support of the continuation of necessary COVID-19 response efforts. The resolution was introduced by SGA President Abuk Jiel.

Jiel said she is in support of senators’ questioning of President Gestring and Kevin O’Kelley.

“This is our first pandemic, we don’t know what to expect, and we’re just trying to do our best,” Jiel said. “We just go through every day trying to figure out what’s going to be the new normal. Those were tough questions but they definitely needed to be answered.”