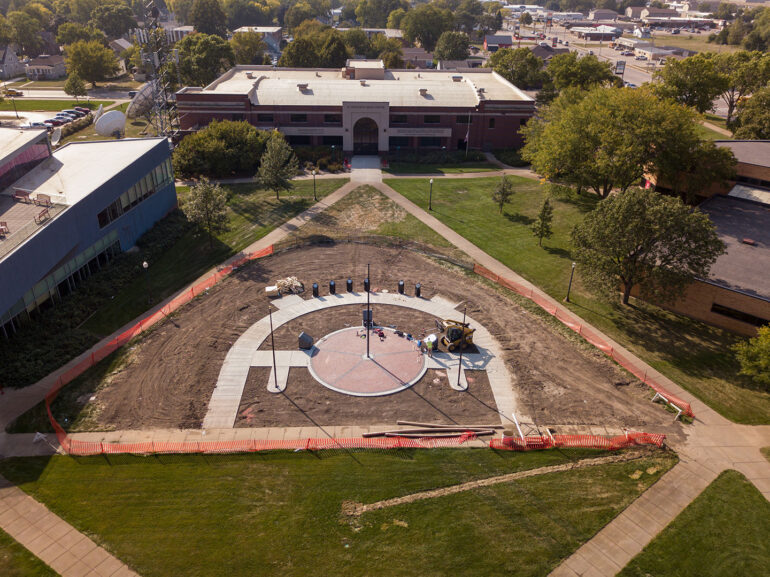 Campus
Construction on Patriot's Plaza began this summer. The plaza will be unveiled on November 11, 2020. Peyton Beyers | The Volante

The USD Student Veterans Club is looking to rebuild their club after the graduation of old members and their executive team last year. Currently, the club has six active members but are hoping to get more students involved before the end of the year.

While he wasn’t previously a member, he said he didn’t want to see the club disappear from campus so he decided to step in as president.

“The club is kind of dwindling down and if they didn’t elect officials, they’re going to abolish the club,” Harwood said. “I didn’t want to see it go away. No one else really wanted to take the position, but there were other people that would take other roles in the club. So I just took the president position over.”

Being a veteran himself, Harwood said having clubs like the Student Veterans Club on a college campus is important as the transition to school can be challenging for veterans.

The Student Veterans Club isn’t just for veterans. Harwood said he encourages all students to get involved. Having more members, Harwood said, will help more veteran students make connections and will build a stronger community on campus.

Right now, Harwood and other executive members are trying to plan events to take place outside before and after winter to help spread the awareness of their club.

One of the events already in the works — not put on by the Veterans club, but will have a direct impact on the club — is the unveiling of the Patriot Plaza.

The Patriot Plaza began construction over the summer after having to petition funding from the Student Government Association last spring. The unveiling of the plaza is set for Veterans Day, Nov. 11 this year.

“I think there’s gonna be a lot of pride there,” Harwood said. “People on campus, I don’t think they really think that much about the military. It’s kind of important to remember why you can come to college and party and have fun and helps make that happen.”

As the construction concludes, Harwood said he is excited to see the plaza unveiled in November.

“I think it’ll be very visible. A lot of people will see it, which I’m excited about,” Harwood said. “I hope it gets people thinking about the military.”