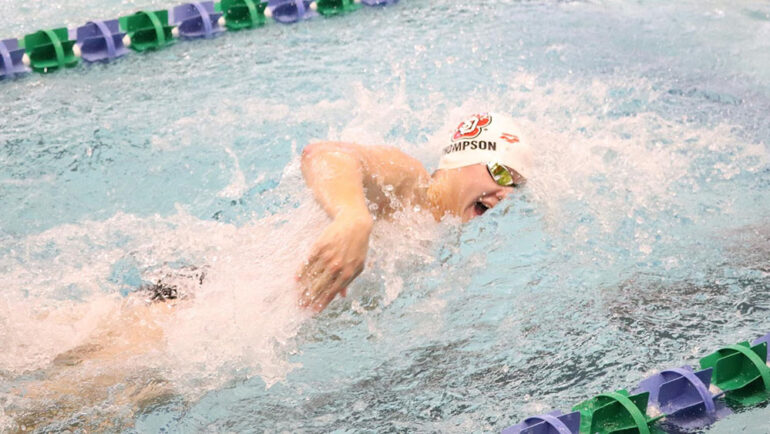 20 hours of practice time, at least 12 credit hours and homework is a busy schedule. But this is the reality of a typical week for a student-athlete at USD.

However, Wyatt Thompson, a senior swimmer for the Coyotes, adds being a student-teacher to the equation.

The senior swimmer is a fifth-grade student teacher at Jolly Elementary school in Vermillion. Thompson said USD has been very cooperative with managing him being a student-teacher along with being a Division I athlete.

“My coaches are always flexible and always understand my situation,” Thompson said. “I really have never had to pick between student teaching or swimming. Whenever I have had a conflict I just let them (my coaches) know and we figure out something that works.”

Thompson said he believes being an athlete has actually helped him be a better teacher. Being part of a team and being a leader in the pool gives him a lot of communication tools to understand the best way to teach and analyze situations, Thompson said.

Some of the most important tools Thompson said he has learned in swimming and athletics include patience and understanding.

“Every single year in swimming it’s a new team. There are new freshmen and we have to learn to incorporate them into the team socially,” Thompson said. “We have to teach them the culture of the team and also just technique and form stuff and that sometimes takes some patience.”

However, Thompson said, being an athlete has not provided every single tool to be a teacher he said he has learned a lot from his professors and other teachers.

“I definitely have a new respect for my own teachers I had. It is not as simple as it sometimes looks,” Thompson said. “(I’m) going to make mistakes but I just learn from them and try to go out and make the best experience I can for everyone.”

The COVID-19 pandemic, Thompson said, has affected everyone in schools this year, including student-teachers. Thompson has had a different student-teacher experience compared to the normal years.

He is not in the classroom actually teaching students as much as he would be in a year without COVID-19. Instead, he said he has focused on creating a digital learning curriculum for students.

“It wasn’t what I pictured I would be doing but I try to find the positives in it,” Thompson said. “(Creating digital learning curriculum) actually made me realize other opportunities I could take with teaching like administration.”

Thompson is still able to get some experience in the classroom. He sometimes teaches in his own classroom and has been a substitute teacher.

As of now, Thompson said he still wants to be a teacher in a classroom. However, having this year’s experience looks good his resume if he would ever consider going into administration Thompson said.

“Our team is hoping to close the gap even more and hopefully give Denver (the reining Summit League Champion) a run for their money for the championship,” said Thompson. “As for myself, I’m just trying to do my best for the team and to get some best times.”