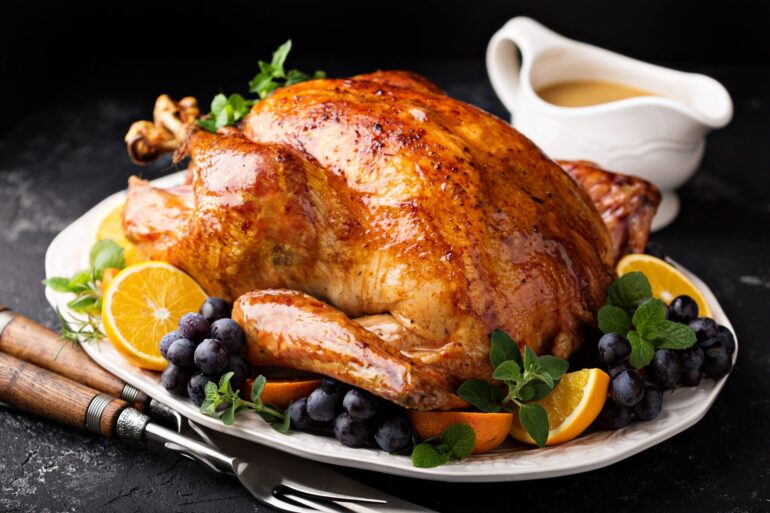 Thanksgiving is my least favorite holiday. I have never liked it. I don’t understand the holiday, why we still celebrate it or why we stuff ourselves full of mediocre food. With that said, I reluctantly eat the food cause I am not going to be the one to tell my grandma I don’t like her lumpy, lukewarm mashed potatoes. So here is a definitive ranking of Thanksgiving food from someone who hates Thanksgiving.

11. Coming in at last place we have Stuffing. Stuffing is the work of the devil. As defined by Wikipedia, “Stuffing is an edible mixture, normally consisting primarily of small cut-up pieces of bread or a similar starch and served as a side dish or used to fill a cavity in another food item while cooking.” Why on Earth would I want the first adjective used to describe a dish to be “edible”. I would argue that this mushy mess of moist bread and celery is inedible. Stuffing is horrid. I cannot express how much I HATE stuffing. The name makes me cringe the most. I will dislike stuffing until the day I die. I will force my kids to also hate stuffing so I don’t even have to make it. Gross, disgusting, worst Thanksgiving food ever.

10. I don’t think many people will argue with me when I say cranberry sauce has no right to even be a thing. What the hell is this too-thick-to-be-jello monster. It looks like jello, it jiggles like jello, but it is the furthest thing from it. And don’t give me that crap about “Oh you can’t buy the cranberry sauce out of the can, you have to make it from scratch”. No, I don’t have to make it from scratch because I have 12 other things on the stove and in the oven and don’t forget about that turkey out on the porch with a beer up its “cavity”. I do not have time to mix sugar, cranberries and water just so it can sit there and jiggle on the table. Cranberry sauce is cut-off.

9. Green Bean Casserole is just an excuse to pour more fat over your vegetables. Why can’t we just eat green beans? I love green beans, but not when you pour a can of cream of mushroom soup over them and slop some crunchy, sodium-filled onions on them. I can’t even talk about this monstrosity anymore.

8. A little better than Green Bean Casserole, but not by a lot is Sweet Potatoes with Marshmallows. First things first; sweet potatoes are weird and gross. Like why are they sweet and savory, but not in a good way? But you caramelize the sweet potatoes with a butt load of brown sugar and then put marshmallows on top? I seriously do not understand. I feel like some poor housewife in the 50’s ran out of ideas and just loaded some sweet potatoes in a pan and called it good. Not the worst thing on the table, but I still won’t touch it.

7. Pecan Pie is the worst of the pies. It gets points for being a dessert, but it has no other redeeming qualities. I will only say this once; Nuts do not belong in desserts. It is literally just nuts, sugar, and syrup. I feel like we’re getting lazy here, people.

6. Finally, here we are at food that I will reluctantly eat (only to appease the people that prepared it). And with the worst type of poultry, we have turkey. Turkey is dry and bland and was meant to be cold cuts. Turkey is not meant to be this decadent, moist slab of protein and fat. These birds only eat grass and leaves, no wonder your Thanksgiving turkey was forgettable. They didn’t even eat turkey at the first Thanksgiving. They had lobster and venison! If my mom was serving up lobster at Thanksgiving, I would be the first person to say what they are grateful for, and I would be grateful for the lobster sitting in front of me. Turkey is the most nondescript, bland, worst protein you could choose for the most iconic meal of the year. Try harder, America. Also putting a can of Busch Light up the turkey’s “cavity” does not make it taste better. Get a better beer and get a better bird.

5. This may be the most controversial of my opinions, but I can do without the mashed potatoes and gravy. The one thing I really do not understand about Thanksgiving is we are celebrating a holiday that has little to do with the actual event. We are slaving over food that was not served at the first Thanksgiving and only became tradition in the 1950’s when everyone decided casseroles were hot shit. Mashed potatoes and gravy are fine. I will eat them on Thanksgiving, but why make homemade ones? Some people like lumpy, clumpy mashed potatoes and all I have to say is “barf”. Make the potatoes smooth and buttery and make the gravy thick and fatty. If you don’t listen to me, SNL’s “Crystal Gravy” will become a real thing. If you don’t know what I am talking about, look it up and stop living under a rock.

4. Coming in at big ol’ number four is your mom’s wine. Finally, you’re old enough to have a glass of wine with the grownups at Thanksgiving. Look at this fancy bitch. Now, is the wine good? Eh. Do you not really appreciate wine yet because your taste buds are old and aged yet? Yes. But is it better than that dark Cabernet your grandmother drinks? Oh you betcha.

3. The best dessert at Thanksgiving is the infamous Pumpkin Pie. And I am not talking about that boring pie you buy from your local HyVee. I am saying, make that pie from scratch, find the best pumpkin filling you can, and top that thing with some whipped cream and you enjoy that sweet and a little bit of savory pie. Pumpkin pie is fantastic. A top tier pie.

2. I don’t know about anyone else, but Mac and Cheese is my main course at Thanksgiving. Creamy, tangy, buttery goodness. Maybe the only way to get that mac and cheese is to sit at the kids table and yes, mom, I will be taking my glass of wine with me. Mac and cheese will have a place in my heart until the day I die. God bless cheese.

1. Finally, to the ‘cream de la cream’ of the annual Thanksgiving meal. Your mouth waters just thinking about their buttery goodness. You wait with tempered anticipation to hear the beep of the oven. They are prepared last because they are the best part of the meal — the bread. I don’t care if it’s sourdough rolls, crescent rolls or cornbread. Bread is the best part of any meal. Any other part of Thanksgiving does not even hold a candle to fresh, warm bread. I give thanks for this bread and butter. No wonder Jesus broke bread; the man obviously knew what he was doing.

Sep 27th, 202237
Pushing off assignments until the last minute has always been a part of college life. We all know...