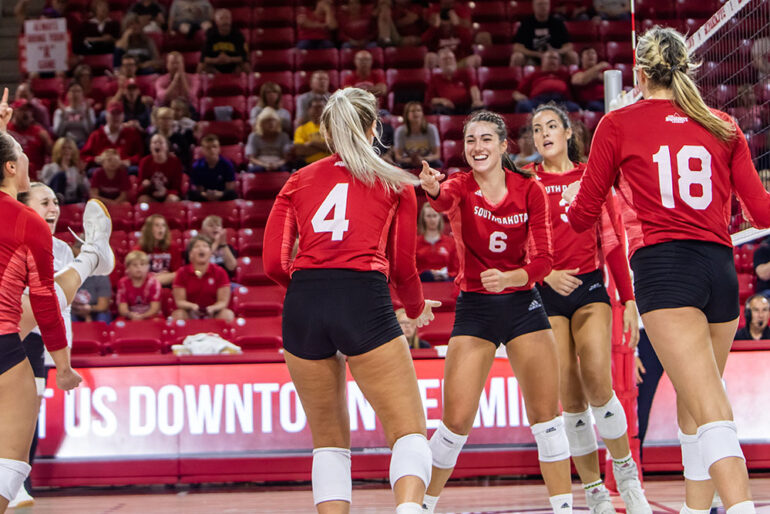 Sports
Senior outside hitter Sami Slaughter plans to use her gained fifth year of athletic eligibility for the Coyotes. The Volante | Peyton Beyers

Similar to the NCAA’s decision to give spring and fall sport athletes an extra year of eligibility as a result of the COVID-19 pandemic, the NCAA has now done the same for winter sport athletes.

Sami Slaughter, a senior outside-hitter for USD’s volleyball team, said she is excited the NCAA made this decision.

“(The ruling) gives athletes, especially seniors, the opportunity to have a normal season,” Slaughter said. “The volleyball team feels like we have unfinished business from last season so it’s great that we get this opportunity.”

Grace Calhoun, the NCAA Division I council chair, said the NCAA did not want athletes to choose between redshirting in case a season was canceled mid-season or playing this fall, winter or spring.

Haley Pederson, a senior diver for USD, said she believes seniors appreciate not having to make this decision.

“It relieves a lot of pressure off us seniors,” Pederson said. “Anything could change at any time. So it’s good knowing we can still compete this year and still have that opportunity to compete next year again too.”

The NCAA’s ruling is still unclear how scholarships for each sport will be handled. The NCAA’s decision on this could affect if players coming back would be on scholarship or not and how many recruits a team can bring in.

Slaughter said she plans to use the extra year of eligibility to play for the Coyotes regardless of how the NCAA decides to manage scholarships.

“Our coaches have been extremely flexible with (scholarships) and helping us with that stuff,” Slaughter said. “I feel like scholarship or not, I think I’d want to play no matter what.”

Both Slaughter and Pederson said the ruling has affected their academic planning as well.

Pederson, who has not yet decided to come back for an additional year, is planning to get her M.B.A. in business administration. She said she would have to add an additional semester to getting her masters if she decided to stay.

Slaughter said she is now going to graduate school, which she hadn’t planned on doing before the ruling.

“The extra year has actually messed with (my academic plans) a lot,” Slaughter said. “Now I have to go to grad. school, which is probably good for me, so I guess it’s not too bad.”

Pederson said academics is not the only factor she has to assess when deciding if she wants to come back for an additional year. She said she has to consider if she thinks her body can handle another year of being a Division I athlete.

“Physically and mentally it would be a huge take-on for an extra year,” Pederson said. “I’ve been fortunate to have no serious injuries so far in my career… but you never know what could happen.”

The NCAA’s ruling does give the additional year of eligibility to all class levels, which means this ruling will impact underclassmen as well Slaughter said.

“The freshman and sophomores are a little bit lost because their fifth year is so far away,” Slaughter said. “As juniors and seniors though, I feel like we’d want to have that extra season just because we lost a major one.”

Slaughter said during the COVID-19 pandemic she and her team have learned to be grateful for every opportunity they get and she looks at the NCAA’s ruling in the same way.

“I’m just grateful to be able to play with my teammates again,” Slaughter said. “I love this group of girls and consider them my family so I am just excited to be able to get back on the floor with them again.”