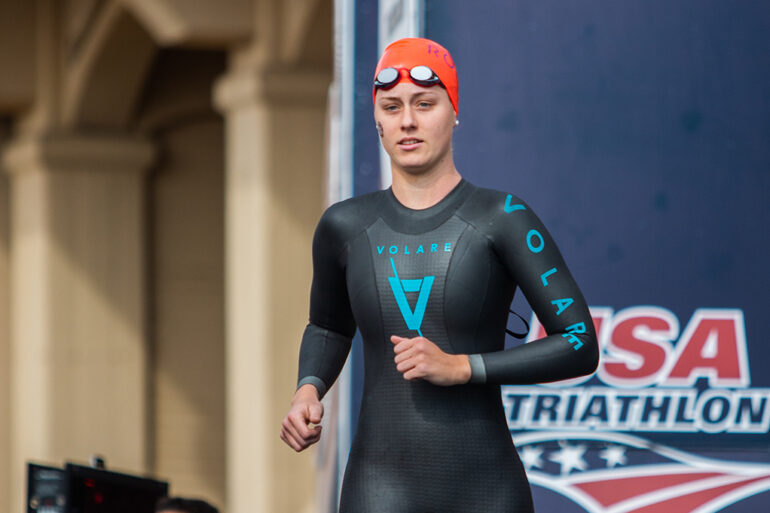 Sports
Sammy Whitting (above) and the USD triathlon team had their Collegiate season cancelled this past fall but will be competing at least twice this spring. Submitted - USD Athletics (Harrison Zhang)

Like all of USD fall sports, the USD women’s triathlon team’s fall season was cancelled last semester after the Coyote triathletes have built one of the top triathlon programs in the nation since the sport was put in place at USD in 2018.

After the opportunity for the Coyote triathletes to finally take the USA Collegiate Triathlon title this past fall was taken away due to COVID-19 the team was disappointed, Joplin said.

“We as a sport had to decide to cancel our championship season (this fall) and it was hard,” Joplin said. “Some of our girls are going to have to unfortunately miss out on a year of our (normal schedule) this year.”

However, the pandemic hasn’t completely prevented the team from competing this academic year.

For example, the Coyote triathletes have been racing the USD track and field team as well as the USD swimming and diving team in time trials this past fall and winter. As of recently, some of USD’s triathletes have even competed for the USD track and field and swimming and diving teams in their own meets, something the team likes to do every year, Joplin said.

“I don’t think there are very many other teams in the country that have as many athletes cross over as we have here,” Joplin said. “We have a very good relationship with the track and swim coaches here that allow our athletes to do that and we have athletes good enough that they can compete in other sports here at USD and still be competitive.”

In addition to this, Joplin has scheduled for the triathletes to compete in two meets this March.

“We have one race on the front end of our spring break and a race on the back end,” Joplin said. “The two races are a few days apart and fairly close to each other so we can travel, stay for the week and do both races… so it works out fairly well.”

Ahead of these meets, the Coyotes are currently preparing this winter to perform their bests, and that means managing the not ideal weather Vermillion has to offer.

“We have to back off on the bike a little bit in the winter… and a lot of that is because we have to be indoors for the bike,” Joplin said. “We can use just the normal stationary bike… and we also have some girls who bike indoors using ‘rollers’ and have them set up their bike on essentially cylinder cones and bike on which takes a good bit of fitness and a lot of balance to sit up there and spin on those.”

Since the team does not do as much bike training in the winter, the triathletes increase the amount of time they are running or swimming.

The adjustment to the weather is bigger for some more than others such as junior Sammy Whitting, who is from Australia.

“At home we never get any snow so we are pretty much outside all year round,” Whitting said. “At home I do a lot of open-water swimming and that’s harder here but we do a pretty good job managing (the weather) I think.”

Joplin said his biggest goal for the team this semester is for the team to be able to feel like life is as normal as possible by May.

“We just want to get back to normal life as much as we can,” Joplin said. “As far as the races go… this spring the girls have an opportunity to earn points for world rankings and continental ranking (for the International Triathlon Union) so for them it’s just going to be get some points (in order to be able to qualify for higher level races).”