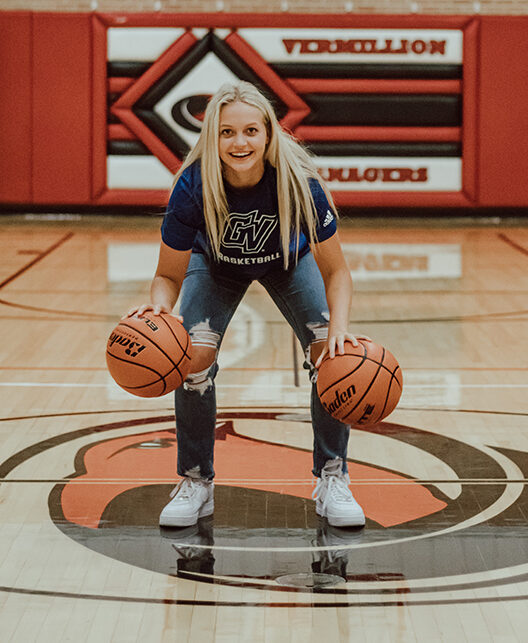 Entering a road match-up against the Ponca Indians on Dec. 17, Lexi Plitzuweit, a senior guard for Vermillion High School, knew she had a chance to do what only five other Tanagers had done before: score 1,000 points in a career.

After 18 points and 32 minutes of game-play, Lexi did it. She became the sixth girls basketball player in VHS history to notch 1,000 career points.

“It’s really cool to have my name mentioned with some of the really great players who played at Vermillion High School,” Lexi said. “I couldn’t have done it without everyone who helped me get here.”

While being only the sixth player to accomplish this at VHS, she was only the third person in her family to reach this milestone.

Despite Dawn and A.J.’s past accomplishments and both of them being out of town getting ready for games of their own, they both made an effort to reach out to Lexi when she scored her 1,000th career point .

“We were traveling on a bus at the time because we were traveling in between Bradley and Oklahoma so I had to watch her do it on my phone,” Dawn said. “I texted her pretty soon after she did it and told her congrats… (Lexi) texted me back saying ‘Me and Chloe are 1,000 point twins.’”

A.J. said he made sure to let Lexi know he was thinking of her too.

“I made sure to tell her congratulations and I told her I was proud of her and to keep winning some games,” A.J. said.

Lexi said the most difficult part about reaching 1,000 points in a career was adjusting to her change in roles from her freshman to senior year.

“It was hard to really go from year to year and understand how and why my role changed for the team and how I fit into it,” Lexi said. “For me it was just important to figure out what the team needed me to do in order for the team to win.”

Lexi said she has applied this same attitude toward this season after achieving the rare 1,000 career points milestone.

“The 1,000 points is great and all but I am more focused on how the team is doing,” Lexi said. “I definitely don’t take (the accomplishment) for granted but I know the team’s goals are way more important than mine.”

The Tanagers currently hold a 6-2 record this season, including a 4-0 record at home.

Lexi said Vermillion’s goal this year is to get to the state tournament and make some noise if they get there.

“We just have to look at each game and focus on improving every game, getting better and becoming the best version of our team,” Lexi said. “If we do that, then I think we’ll be in a pretty good position to achieve some of our bigger goals.”

After this season, Lexi will be preparing to join the Grand Valley State University Lakers women’s basketball team.

However, GVSU’s current success is not the only thing that sold Lexi to committing to the Lakers.

Lexi’s mom’s first head coaching job was at GVSU. In addition, the current head coach of the Lakers, Mike Williams, coached with Dawn for several years at GVSU and the University of Michigan. Williams is also the God Father of her brother A.J.

“It was interesting when we went there for Lexi’s first visit because there was so many people there we knew from when we were there back in the early 2000’s,” Dawn said. “I didn’t know how (Lexi) would take it… but she had to hear a lot of: ‘Oh! I remember you when you were this big!’… Apparently, it didn’t bother her too much I guess.”

Lexi Plitzuweit and the Tanager’s next game is an away game against Garretston Jan. 22. Garretston is currently 8-1 on the season and is considered one of the best teams in Class ‘A’ in South Dakota.