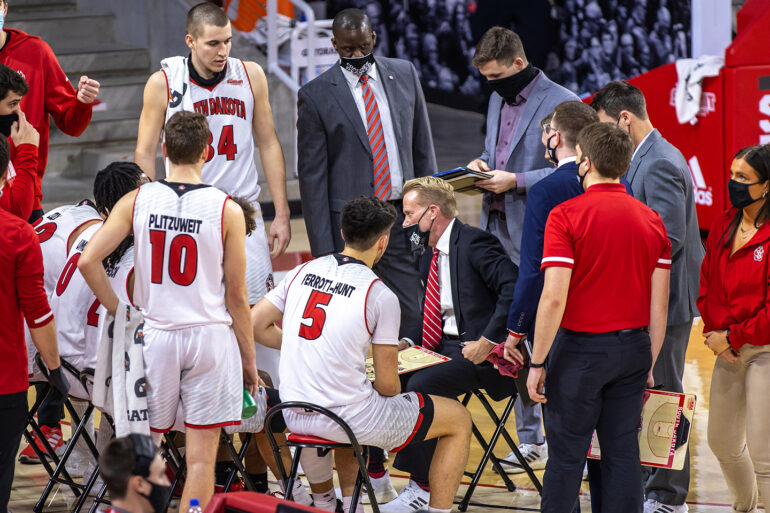 Men's Basketball
Men’s Basketball Head Coach Todd Lee talks to the team during a game earlier this season. After a splitting the two games over the weekend against South Dakota State, the men’s team is currently 9–1 in conference play. Peyton Beyers | The Volante

The men’s and women’s basketball teams traveled to Brookings last weekend to take on the South Dakota State Jackrabbits.

Friday night started with a women’s game tip-off at 5 p.m. SDSU took an early lead in the first period and maintained that lead throughout the game. Freshman guard, Maddie Krull scored the first points for the Coyotes at the 7:32 mark of the first period.

The game ended with a 45-64 loss to the Jackrabbits. Senior guard Liv Korngable had the highest scoring of the night with 16 points. Hannah Sjerven added 10 points.

The Coyotes maintained their lead throughout the second half to win 64-56. Redshirt sophomore guard AJ Plitzuweit was the highest scorer of the night with 19 points. Stanley Umude added 14 points and Perrott-Hunt 11.

The following night the USD women’s team tipped-off at 5 p.m. and had a four-point deficit at the end of the first period with a score of 17-13.

In the third quarter the lead changed between the Coyotes and the Jackrabbits eight times. The period ended with a tie at 53 points.

The Coyotes were able to maintain their lead until the 0:54 mark of the fourth period, where the Jackrabbits surpassed the Coyotes in order to end the game up by five points. The Coyotes lost 75-80. Senior guard Chloe Lamb finished the game with 18 points. Sjerven added 16 points and Korngable 15.

The men’s game tipped-off shortly after at 7:30 p.m. The Coyotes started the first period with the lead and were able to maintain it until the 16:23 mark. Soon afterwards the Coyotes regained the lead and carried it throughout the first half to end with a 44-38 lead.

At the 9:12 mark of the second half, the Jackrabbits surpassed the Coyotes once again and were able to keep their lead for the rest of the game. The game ended with a score of 89-78 and a loss to the Jackrabbits.

Umude scored the most points for the Coyotes with 34 points in 35 minutes of game play. Plitzuweit added 20 points.

This upcoming weekend, Feb. 13 and 14, the USD men’s and women’s basketball teams will be traveling to Grand Forks, North Dakota to take on North Dakota. The women play at 12 p.m. and the men play at 2:30 p.m.