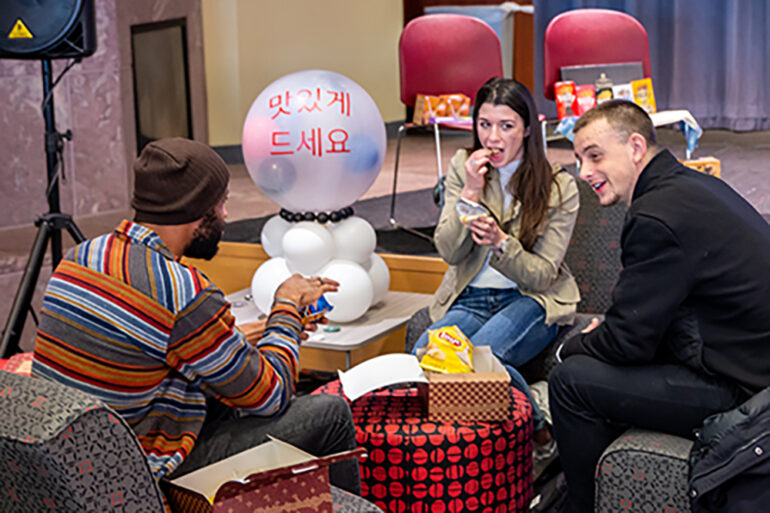 Campus
The event allowed students to meet with international students, discuss languages, and participate in a language trivia quiz for prizes. Jacob Forster | The Volante

On Feb. 22, the USD International Club celebrated International Mother Language Day to recognize the many cultures of international students and bring visibility to a host of languages.

The club hosted an event in the Muenster University Center pit lounge from 12 a.m. to 2 p.m. Students had the opportunity to meet with international students, discuss mother languages and take place in a language trivia quiz for prizes.

Alice Lunardelli, president of the International Club, said the day is a great way for international students to both feel represented and have an outlet in which they can speak their language.

“I speak Italian, and it’s not a language that’s represented in the modern languages department… so it’s a way for people to be like, ‘oh my gosh, somebody speaks Italian,’ ‘oh, I can speak Italian on that day and someone will be interested in it,’” Lunardelli said. “It’s kind of like a bridge for those who want to learn more but they can’t, and for those who want to share and they can’t always do so.”

Lunardelli said she speaks English most of the time, and said that sometimes she’ll talk to her parents and realize she’s falling out of practice in speaking her native language. Despite this, it is easy for her to stay connected to her culture because she is close friends with another Italian in Vermillion, though she said language is a part of culture that is hard to maintain unless an individual has someone to share it with.

“You can always keep your traditions or your habits or your cuisine, so it’s easier to cook spaghetti and feel like I’m at home, but it’s harder to maybe have a conversation in Italian with someone who not only speaks the language but also understands my values,” Lunardelli said.

“The more you interact with diverse people, you become… more open and understanding of people (that) speak in a certain way. For instance, I have a friend, and he’ll command me to do something… and it’s weird, you’re like ‘oh you can’t command me to do that,’ but… that’s how they even talk to their friends,” Lane said. “So just even understanding small things like that.”

After a series of protests, Bengali became a national language, and Feb. 21 became a holiday. Eventually, UNESCO adopted the day, and since 2000, International Mother Language Day has been celebrated worldwide.

“I think it’s a component of how we celebrate differences and show respect for other people who are different or speak a different language,” Ali said. “That’s why it’s so important — we want to preserve all languages.”

Ali said she wants students to develop skills for learning about other cultures and their languages. Language, she said, is part of global competency skills that students have to have to get along with people from other countries.

“If you want to be successful after you graduate and you want to get a job, whether it’s in the United State or you’re going abroad, you need to learn how to work with people who are different from yourself,” Ali said. “This is a skill to have, to be able to work with other people who speak in different languages and (are) from different cultures.”