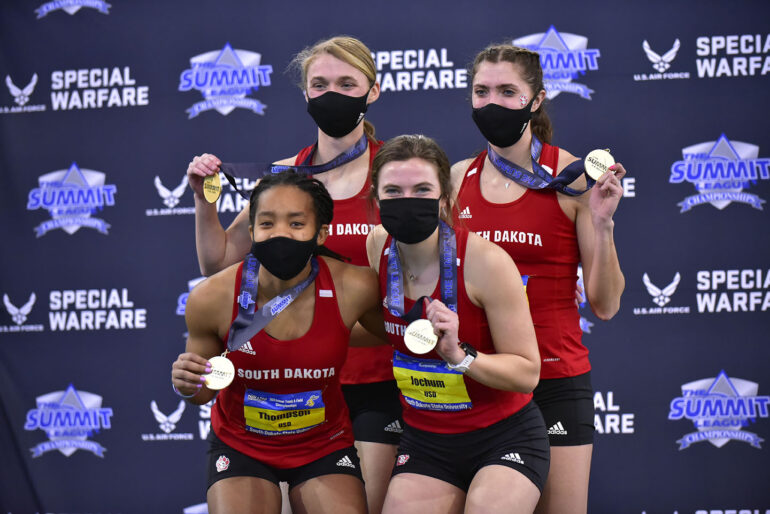 The Coyotes recorded a second and third place finish at the Indoor Track Summit League Championships Saturday and Sunday.

On the women’s side freshman sprinter Sara Reifenrath led the way capturing two individual titles and one relay title. She also broke two school records and was named the league’s Newcomer of the Championship.

“I think I knew i could do it. It was just cool to be able to go out there and just do my best and push myself.” Reifenrath said.

Reifenrath and her teammates Madison Jochum, Holly Gerberding and Danielle Thompson finished first in the 4×400 meter relay and clocked in at 3:46.46 the sixth fastest time in USD history.

Gerberding brought home a gold medal of her own after defending her pentathlon title.

“The pentathlon is a series of five events,” Gerberding said. “My first race was a hurdle and I tied my PR so I was super excited about that. The highlight of it was my long jump. I really popped a big PR and finally broke the 18 foot barrier.”

In the pole vault sophomore Gen Hirata won her first Summit League title vaulting a PR of 14-3 ¼ landing her seventh in the NCAA in the event. Her teammates Landon Kemp and Makiah Hunt joined her on the podium for second and third place respectively. Kemp vaulted 13-8 ¼ and Hunt finished with a 13-2 ¼.

On the men’s side Brithton Senior defended his 60-meter hurdles title and won gold, clocking in at 7.99 seconds. Senior’s prelim time of 7.77 seconds moved him to 10th nationally.

“I really enjoyed the race even though it wasn’t a competition in my heart,” Senior said. “I just went out that day and felt really good and I know I could have ran faster if I had competition. I feel good about nationals since I am seeded 10th and not 16th like last year.

Junior Jack Durst jumped a 6-10 ¼ in high jump to win the meet, he also placed fourth in triple jump. His teammates Ethan Heitman and Travis Larson finished second and third with heights of 6-8 ¼ and 6-6 ¼ respectively.

In the men’s pole vault Ethan Bray claimed the Summit League title with the height of 18-5 ½.

“I felt really good going into the day and my body got pretty loose easily,” Bray said. “I was super excited and confident going into it just based on how I had been jumping the last few weeks. I jumped six inches higher than the next guy down from state and I knew he would be good competition and I never want to lose to him.”

The South Dakota Coyotes will wrap up indoor track season by sending a group of Coyotes to Fayetteville, Arkansas March 11-13 for the NCAA indoor meet. The Coyotes competing that qualified are Bray, Eerik Haamer (pole vault), Girata and Senior. More Coyotes have the possibility of competing once COVID-19 and injury scratches are announced.

“I really like jumping at the University of Arkansas, it’s a really nice track setup they have down there,” Bray said. “I’d like to get top three at nationals. I’m seeded fourth right now. I’m really not worried about placing as long as I go down there and give it everything I know I can do.”