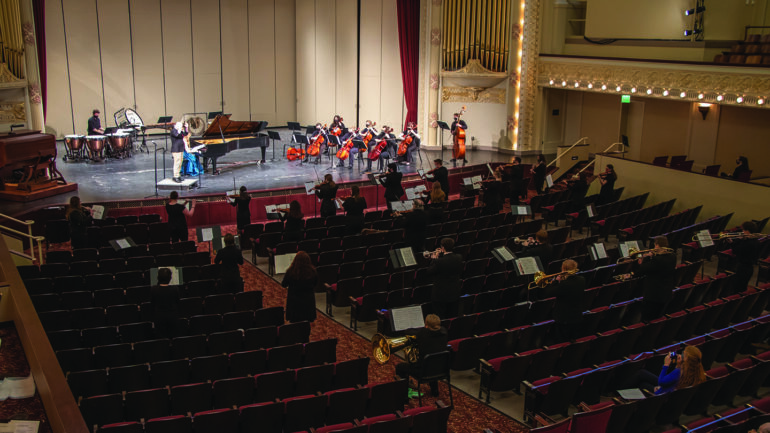 The USD Symphony Orchestra presented their winter concert Friday. Due to COVID-19, the performance had limited attendance by invitation only and was live-streamed for others to virtually attend.

Director of Orchestras Luis Viquez said that they have followed all USD mandates, but preparing the orchestra for this concert had its challenges due to COVID-19.

“We have had students in quarantine, we have had people missing several rehearsals. But we always find creative ways to accommodate to all those difficulties,” Viquez said in an email interview with The Volante.

To practice while ensuring social distancing guidelines were being followed, Viquez said the orchestra was able to spread out in the house seats but that this also had its own difficulties.

“The orchestra is spread apart all over Aalfs Auditorium, which has made rehearsing to become a huge challenge because it is hard to listen to each other while social distancing,” Viquez said.

Viquez said he spent many hours preparing for the winter concert, but he didn’t have to do it entirely alone.

“We also have the help of our music faculty, who work closely with our students. I would like to particularly thank Dr. Ioana Galu, Dr. Susan Keith Gray, Dr. Sonja Kraus and Dr. Amy Laursen for all their assistance with the concert,” Viquez said.

The USD Symphony Orchestra is just one of USD’s music ensembles, and it also serves as a class for students. This concert featured three student soloists: Bailey Quade as soprano, Nicole Gerdes on piano and Jade Bolin as conductor, which Viquez said have all been “working really hard!”

“People usually would pay to go to hear the major symphony orchestras in our area, all concerts of the USD Symphony are free and open to the community,” Viquez said.

Freshman music education major Emily Weisenburger said the orchestra has also provided her with many opportunities.

“The Symphony Orchestra has offered me a place where I can grow, thrive, meet new people, and learn about other people as well,” Weisenburger said in an email interview with The Volante. “I learn music, I grow in my skills as a musician, but being in orchestra also has allowed me to meet so many different people and hear their stories and perspectives on life.”

Weisenburger also said the orchestra helps to show performers what they are capable of even if they do not see it themselves.

“It is a place where everyone can be safe and have their voice heard. My teacher, Jeff Paul, remarked that I might not speak a lot, but you put an instrument in my hands and I have a lot to say—musicians have a lot to say, and it is honestly an inspiration to be able to work with so many amazing people every single day,” Weisenburger said.

Despite alterations due to COVID-19, Viquez said this concert still meant a lot to him as well as the orchestra.

“We are just delighted and thankful that we can still make music together! There are many professional orchestras that cannot return to in-person activities because of the pandemic—I tell my students to never take these performing opportunities for granted,” Viquez said.

Weisenburger said she also hopes this winter concert was able to bring hope and encouragement to the audience.

“The world has felt like such a hostile and cold place with everything that is going on. To be able to play music with one another again in person is a gift, and I hope that the audience was able to relate to the music and also realize that life is beautiful and shouldn’t be taken for granted,” Weisenburger said.