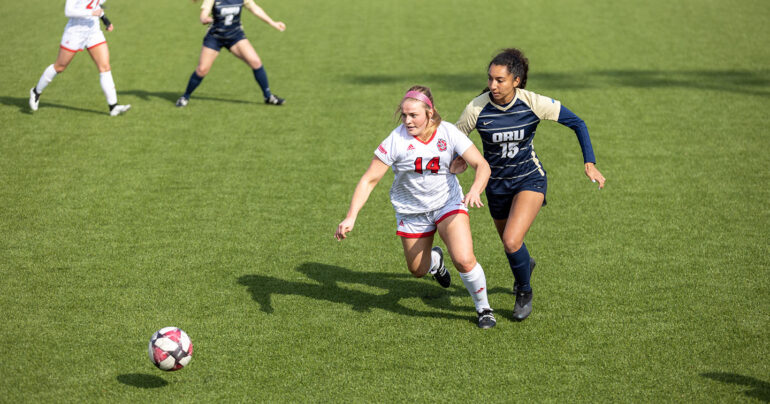 The Coyotes soccer team adapted and reacted to a spring season slate. The team boasted a large roster of underclassmen who had not had collegiate soccer experience, yet the extra semester of preparation to learn ‘Coyote soccer’ allowed them to excel on the field this season.

During the first game of the Oral Roberts series Friday, sophomore Shaylee Gailus and freshman Ashby Johnston both sunk to goals into the net, allowing the team to win 2-1. The second game saw freshman Taylor Ravelo score a point, thanks to an assist from junior Taylor Cotter. The Coyotes won the second game against ORU 4-1 Sunday.

However, the start of the season didn’t start out as smoothly as the wins over ORU. They faced tough teams early in their schedule.

“We have a lot of hard games first, and we still have a lot of development to do as a team together because a lot of our like players haven’t played collegiately yet,” junior Tiannah Moore said. “Okay, well, this is an obstacle we’re gonna have to overcome sooner or later. So I think that kinda I think our record towards the beginning especially doesn’t define us as a team because we had so much developing to do still even, even with practicing together for so long.”

The team has relied on what each individual can bring to the table individually to allow the team to achieve their goals as a whole, Moore said.

“I think that’s the biggest thing because they all are so talented, they know how to play the game, they know how to see the game,” Moore said. “But kind of changing how they look at the game, it’s something that they don’t struggle with, but you can tell they’re not completely getting or they weren’t.”

The biggest obstacle for the team was guiding the newcomers to play soccer how South Dakota plays soccer, Moore said.

“In practice, we’re getting a good rhythm of how we play and I think that guiding them that way, has really really helped them really change the way they play with us, really connected us together as a team,” Moore said.

After getting successful minutes under her belt this season, Gailus has been a key player and leading scorer for the Coyotes this spring, said head coach Michael Thomas.

“I was just fighting for minutes, and trying to, like, complete with some really good forwards, and I think this year just finally like hitting my stride trying to create my connections with the other forwards,” Gailus said. “Kind of figuring out how to play collegiately because as much as you like prepare for it, you’ve really aren’t prepared to how to play.”

“It’s one of the harder athletic transitions, anybody goes through,” Thomas said. “When you start playing collegiate sports, just because the athletes we have at USD are talented enough that most of these transitions have been fairly easy.”

However, Thomas attributes the team’s chemistry and success to the upperclassmen that have guided the underclassmen during COVID-19 and the fall semester to now.

“The pandemic gave them a big advantage over other freshmen classes in the fact that they got three months of practice in the fall,” Thomas said. “To prepare before they had to play their first collegiate game. Whereas with us being a fall sport, most freshmen classes get two weeks and you either have to be ready or you get put on the backburner for next year.”

The extra month of preparation allowed the freshman to achieve the success they wouldn’t have seen normally, Thomas said.

“I honestly believe that some of these freshmen that are having success wouldn’t have had the same success if we had played the season in the fall like scheduled,” Thomas said.

The Coyotes have two more matchups in the regular season before they look ahead to the Summit League tournament in Omaha, Nebraska April 15-17.

“Well we always had to look at the games coming up one game at a time,” Moore said. “ We don’t try to overdo it overwork ourselves, but I really think when we connect as a group, and we come together and embrace what everyone brings we’re truly unstoppable as a team. So I think trying to find that before. Before the tournament is, is really important.”