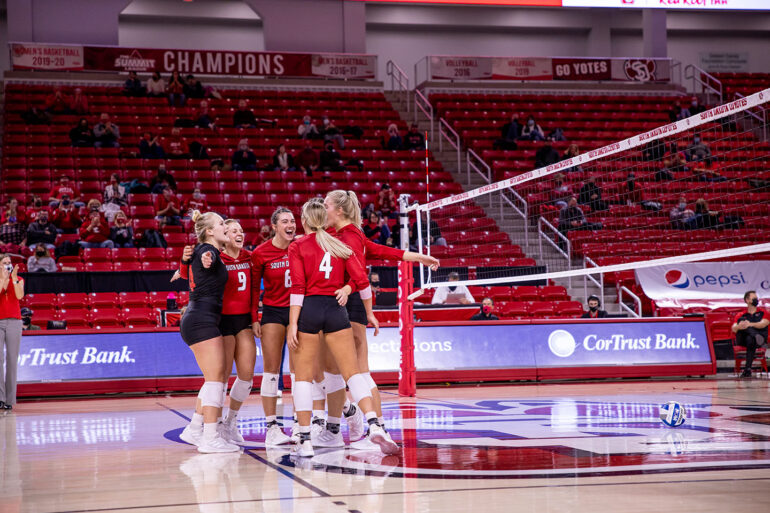 After a third place finish in the regular season, USD plays Kansas City to open the Summit League Tournament Friday night. The Coyotes were swept by the Roos in Vermillion earlier this season, with both matches going five sets.

“I mean it was frustrating but it was a really good five setter for both nights,” Sami Slaughter said. “I think we just have to focus on our side. I think a lot of us got frustrated, especially on the offensive side, when we’re taking really good swings and they’re picking them up, and I think we kind of shied away from those different shots instead of taking them again and making them defend them again. And I think our blocking scheme was a little off, and we practiced that all week and I think we’re ready to go.”

USD (10-5) is the third seed in this weekend Summit League Tournament that will be played Friday and Saturday at the Sanford Pentagon in Sioux Falls. Denver took the regular season title after a sweep of Kansas City (that you can look at here now) in the final weekend of the regular season. Kansas City holds the second seed and Omaha falls into the fourth seed.

“I think the fact that we got Kansas City first round, we really have that chip on our shoulder from during conference when we played them,” Madison Jurgens said. “Really excited to go into the tournament. I mean, coming into the season the tournament’s not guaranteed, only four teams are making it.
buy clomiphene online https://pavg.net/wp-content/languages/new/where/clomiphene.html no prescription
”

The Coyotes ended their regular season with a pair of wins over Western Illinois to solidify the third seed in the tournament. This will be the first Summit League Volleyball Tournament to be played outside of Denver since 2014. Vermillion was set to host the tournament this year until the tournament was moved to Sioux Falls. The Coyotes will still host next season’s tournament.

The tournament will allow a limited amount of fans in, making it the first conference tournament to do so since the start of the COVID-19 pandemic. The basketball championships at the Pentagon allowed for parents and family to attend in early March.

“It’s really nice, especially with basketball only being family,” Jurgens said. “We feel really grateful that they’re allowing more fans into the arena and it’s always nice to have fans behind you. It helps with energy and it helps with just that momentum going into games. We played a couple games without fans there and I think we do a good job of bringing our own energy, but it’s also, the fans there, it makes a world of difference. So we’re really excited to have our fans there and have them behind us.”

The Summit League Volleyball Tournament starts Friday afternoon with Denver taking on Omaha at 2:30 p.m. and the Coyotes and Roos to follow at 6. The Championship game is set for 2 p.m. Saturday.