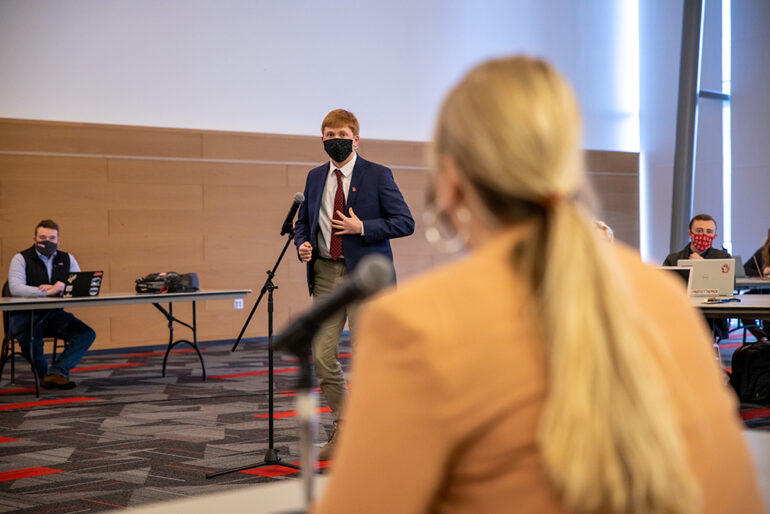 “We’re about being something bigger for people to be involved with and have something that no matter your interests, no matter how much time you give, how much money you have in your bank account, you can do this. This is something that you can make an impact on USD,” Meierhenry said.

The motion failed to make the Hammock Club a large student organization.

“CAB is a student organization that plans events and programs for students. This year we’ve had to reimagine how we utilize funds,” Solberg said.

The motion to make CAB a large organization passed.

Along with CAB, Dakotathon, an organization raising funds year round for the Children’s Miracle Network, gained large organization status through SGA.

The Tiospaye Student Council also gained large organization status. They host a variety of events including the annual Wacipi in the spring.

The International Club was the final club to gain large organization status. The club holds events every month, including the Festival of Nations.

Logan Johnson said most of their allocated funds are utilized.

The ESports competitive video game league gave a student organization report and explained their current status as an organization.

SGA also discussed the upcoming expiration of the legal aid contract. SGA has the opportunity to decide whether or not to keep or renegotiate the contract with the current legal aid. That is still to be decided.

Senate Bill 1, a bill altering the constitution, was tabled. This bill will be voted on next week if it’s untabled.