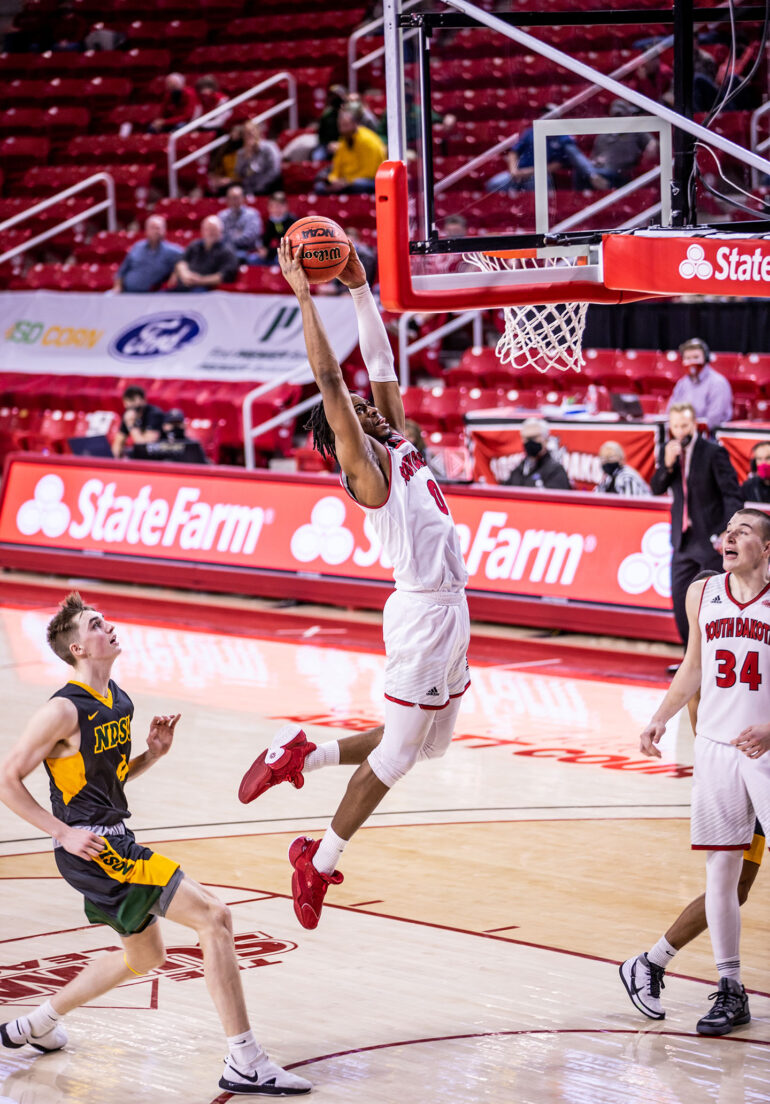 USD men’s basketball earned the No. 2 seed in the Summit League Tournament after splitting last weekend’s series with North Dakota State. The team is forced to change their lineup after losing starting point guard A.J. Plitzuweit to a knee injury late in Saturday’s game against the Bison.

The Coyotes ended the regular season with a 13-10 record posting an 11-4 mark in conference play. USD heads into the tournament down their second-leading scorer in Plitzuweit and will also be without their freshman forward Nikola Zizic.

Head coach Todd Lee said the team did not have much time to adjust for their regular-season finale against North Dakota State after losing Plitzuweit just one day prior.

“It will be good to have a week to prepare and put guys out there in positions and get them used to playing in certain spots,” Lee said.

Lee expects junior guard Mason Archambault to be available for practice this week and the Summit League Tournament this weekend.

Lee said he anticipates most of the team’s offense to run through senior shooting guard Stanley Umude, but said the team needs other players to get involved.

“We definitely need more balance; we need other guys to step up,” Lee said.

Umude leads the Coyotes this season with 21.4 points and 6.9 rebounds per game. Junior Guard Xavier Fuller, who averaged eight points per game this season, is expected to have an increased role in the offense moving forward. Forward Tasos Kameteros heads into the Summit League Tournament coming off a career-high 22 points in Sunday’s game against the Bison.

The Summit League tournament will take place March 6-9 in Sioux Falls at the Stanford Pentagon. The Coyotes will take on No. 7 seed Western Illinois in the first round at 8:45 p.m. Saturday. USD swept the Leathernecks in the regular season, defeating them 65-60 and 84-74.

All quarterfinal and semifinal matchups will be aired live on Midco Sports Network. The championship game will be aired on ESPN2 and available to watch on the ESPN app.