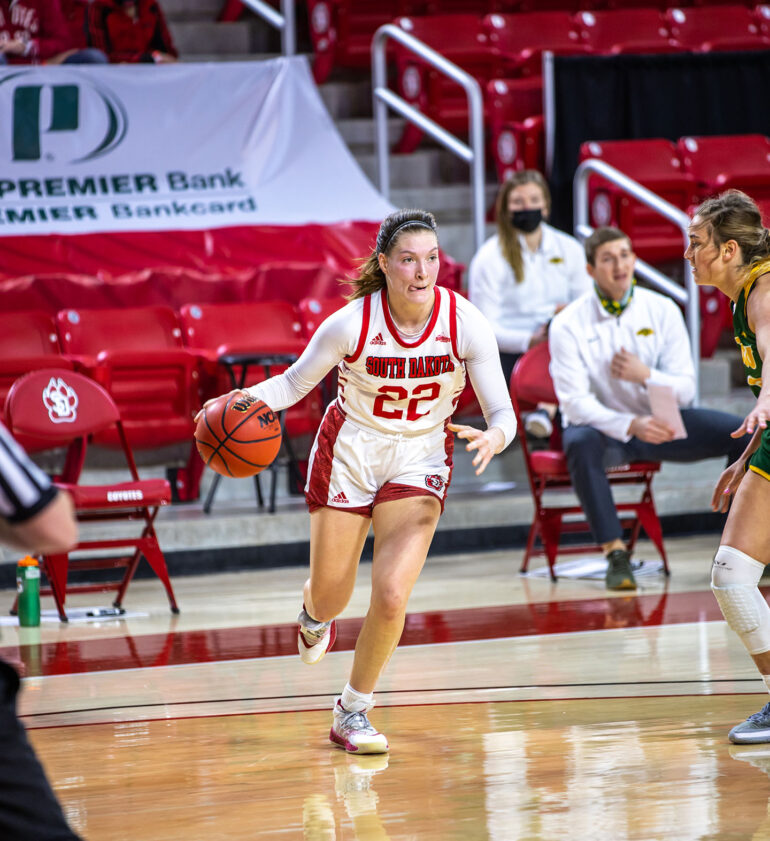 Sports
Senior Chloe Lamb is one of two seniors who have announced their return to the court next season. The Volante | Peyton Beyers

As postseason play approaches for many USD sports, athletes are seniors are pressed with deciding on whether to extend their time at USD an extra year to compete one last season. Two Coyote women’s basketball players announced their plans Monday at USD’s pre-Summit League Tournament press conference.

“I mean I have told other people I plan on coming back,” Chloe Lamb said. “I’m looking forward to having another year. It kind of works out with school and what I want my future to be and so as of now, I’ll be back.”

Lamb is studying kinesiology with a focus on exercise science. She is also minoring in coaching.

“I’ve got a coaching minor, and hoping to get into coaching, hope I can get a GA (graduate assistant) position, somewhere, looking at Coach P over here,” Lamb said. “No, but hopefully I can get into that and stay in college basketball and, hopefully, that puts me in a good position.”

Lamb’s classmate Liv Korngable also announced her plan to return for the 2021-22 season, but had to make some adjusts to make it happen.

“I also will be coming back next year,” Korngable said. “Unlike Chloe, my path kind of shifted with my career path. I interviewed for some PT programs this fall, so I was planning on doing that. But when I was given the opportunity to take another year. I couldn’t pass that up. I think, you know, I get to be a PT for the rest of my life but I can only play college basketball with such a special group for so long, so I think I would I’d be dumb not to take the opportunity.”

The other two seniors on the women’s basketball team haven’t made announcements on their plans for next season yet. Hannah Sjerven said her focus is on the Summit League Tournament following Sunday’s game and Monica Arens, who didn’t play this season due to injury, told The Press & Dakotan’s Jeremy Hoeck she hasn’t made a decision yet.

The women’s basketball team kicks off the Summit League Tournament Saturday, facing Oral Roberts at 2:45 p.m. in the Sanford Pentagon in Sioux Falls.