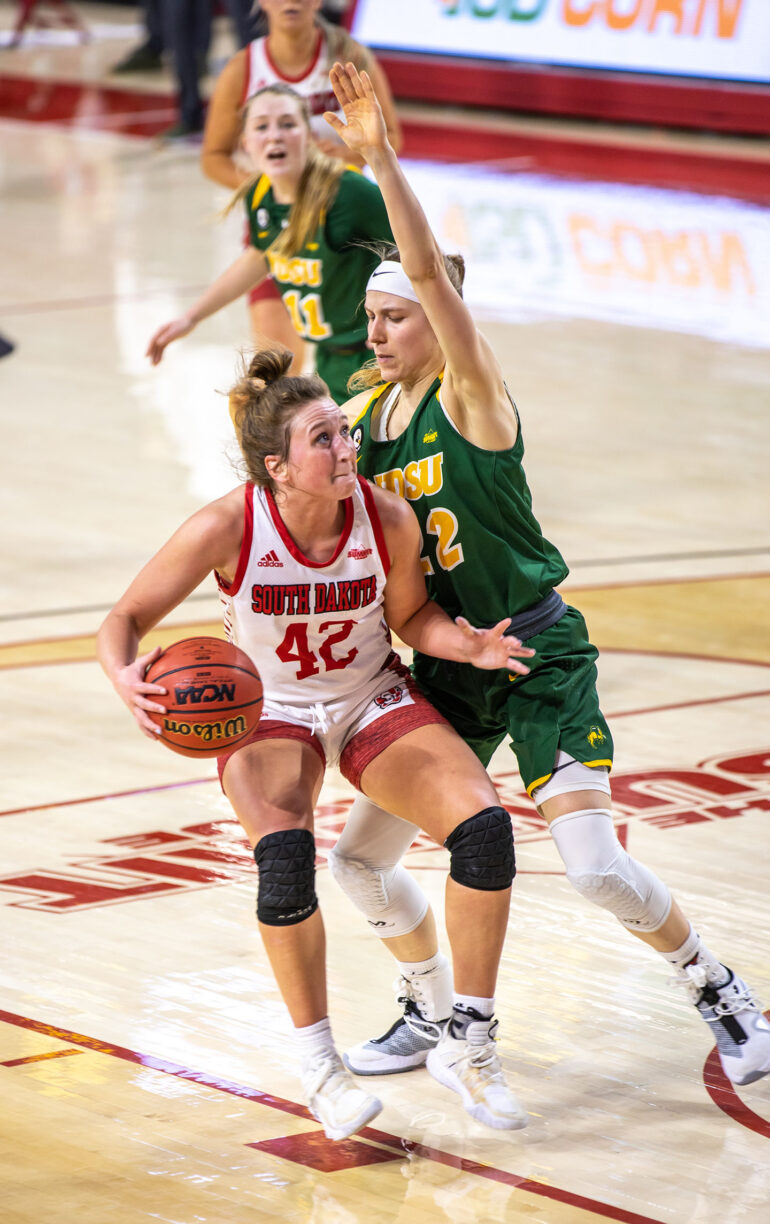 Would the season begin on time? Would they be able to play non-conference games? Would they make it through their conference season? Would an end-of-the-year tournament be possible?

The women didn’t let this uncertainty stop them, and instead they took the opportunity to play the 2020-21 season as a blessing, coach Dawn Plitzuweit said.

“After March 12, 2020 when the announcement was made that the NCAA tournament was canceled, we were just waiting around to see if we were actually going to be able to keep playing, and thankfully we’ve been able to do so,” Plitzuweit said.

Now, with the uncertainty gone, the women are heading to the Summit League Tournament with the second seed in the tournament.

They will have their tournament debut Saturday in Sioux Falls, South Dakota where they will take on the seventh seeded Oral Roberts Golden Eagles in the Sanford Pentagon.

USD previously played Oral Roberts on Feb. 20 and 21, where they won by at least 22 points in each game. The Golden Eagles however have had the last week off from play due to COVID-19 cancellations. They instead were able to prepare for the Summit League, but the Coyotes still competed in conference play against North Dakota State on Feb. 27 and 28.

“(Oral Roberts) has great athleticism so they can really push it up and down the court and score quickly,” Plitzuweit said. “They can defend at a very high level, rebound and shoot the ball really well, so we’ve got to really be locked in and focused. I think the advantage we have is that our players understand how good they are.”

With a win against Oral Roberts in the back of their mind, the Coyotes are ready to take full advantage of what every member of their team has to offer.

In the games against NDSU, sophomore guard Macy Guebert stepped up to the plate and was able to make the moves needed to help USD secure a win.

“This last weekend especially (Macy) had huge performances for us,” senior guard Chloe Lamb said. “She does the more intangible things, and she does them really well, like boxing out, getting rebounds and keeping her kid off the glass. All of that was huge for us this past weekend. She’s someone that’s going to come in and put in the work and she does the little things really well that people don’t always see.”

Another obstacle the Coyotes are going to have to deal with going into tournament play is the absence of a crowd. At the beginning of their season, the USD women’s team got used to creating their own energy, but at their recent conference games the Coyote Crazies and fans have supplied much of the needed cheers and momentum.

“Creating energy is something that every team has had to go through,” Lamb said. “We’ve got a pretty good bench and hype squad so it’s not something that we are too worried about. I’d say (creating energy) comes naturally from all of us. Claudia Kunzer usually takes care of that for us pretty easily.”

After an abrupt end to their season last year, the women’s team is ready to make their comeback and they have more drive to accomplish all their goals after not receiving the ending they wanted last season due to the COVID-19 pandemic.

“I think there’s always been a feeling of unfinished business,” senior center Hannah Sjerven said. “We may have won last year, but we didn’t really get the satisfaction of going to the NCAA tournaments afterwards. For us, it’s almost like it wasn’t quite real. We won, and that’s a huge accomplishment, but we don’t feel like we’re done yet.”