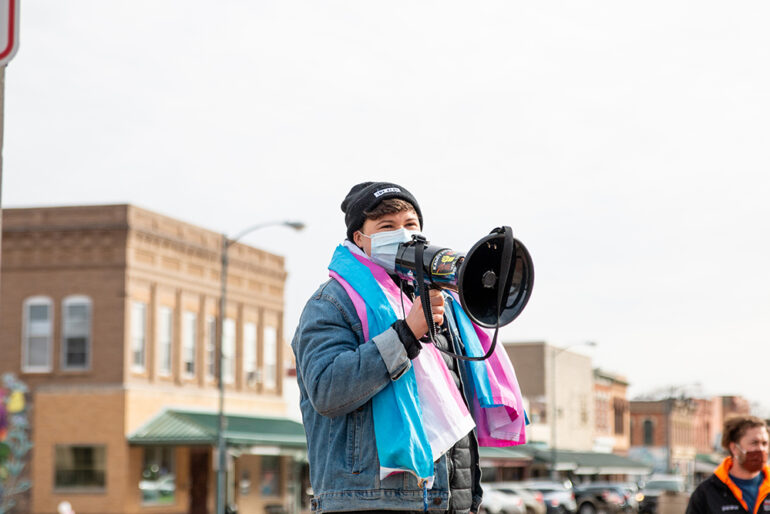 Pierre
Dylan Daniels, a board member of the Transformation Project, participated in a march against the bill in Vermillion in Feb. Rachel Thompson | The Volante

South Dakota legislators introduced House Bill (H.B.) 1217 Feb. 2021, also known as the trans sports bill, which would ban transgender women from competing in women’s athletics. Transgender advocates marched at the capitol in Pierre, South Dakota March 11 in protest of the bill. Later that day, Gov. Kristi Noem amended her earlier statement that she was “excited to sign this bill” to “we are still examining the bill.”

Gov. Noem sent the bill back to the legislature with a “style and form” veto to change the language after facing criticism March 29.

Michael Card, a political science professor versed in state and local government, said a style and form veto involves making sure that the language clearly expresses the intent of the legislature or of the state.

“So often, it’s a matter of certain word choices, like will and shall… or it’s making sure that a comma is in place,” Card said.

The revised bill would ban transgender women from K-12 in playing in women’s sports, excluding collegiate athletics. Gov. Noem said she would work with the legislative leaders to schedule a special legislative session in late May or early June to revisit the bill along with other pending bills in the state. The bill, however, didn’t have a majority or two-thirds vote to pass to allow change or to pass the original verbiage. On April 7, Noem said she would not ask lawmakers to revisit the trans sports bill debate in the special session, meaning the bill is off the table for South Dakota.

In federal law, Title Vll covers discrimination on the basis of gender identity and sexual orientation, while Title IX says that no one should be excluded from participation, denied benefits, or subjected to discrimination on the basis of sex. The anti-trans Sports bill supporters argue that by passing H.B. 1217 and not allowing transgender women to compete in women’s athletics, they are prioritizing and protecting cisgender women under Title IX procedures.

Dylan Daniels, a board member of the Transformation Project, said he does agree that this bill would harm women in sports because it will harm trans women and trans girls in athletics.

The NCAA considers transgender women to be women and allows them to compete in the women’s roster. The Industry and Commerce of South Dakota said during the legislative testimony that the bill was not a good idea because the NCAA would relocate athletic events in concern of civil rights protection. If these events were relocated, South Dakota would lose millions of dollars, Card said.

“It’s really sad that it comes down to the money as to whether or not we pass these bills that are really deeply discriminatory and affect our youth,” Daniels said. “We see less of protecting our youth and more of not wanting to pass these bills through because we’re afraid of being sued or losing money.”

Many supporters of the trans sport bill are concerned about the biological advantages they say transgender women would have in competition. In 2013, South Dakota created a policy making any transgender athlete who wanted to play a school sport acquire documentation from their physician that they identity as transgender. An independent hearing officer also then must determine if the athlete has any competitive advantages. Card said this procedure was put in place to make sure that every transgender athlete is consistent with how they identify.

“You couldn’t just wake up in February and decide I’m going to run women’s sports, and I’m going to win,” Card said. “So, there’s already a procedure in place to prevent that from happening”.

Card said since this policy has been in place there has only been one athlete determined to not have an advantage in competition.

Daniels said supporters of the trans sports bill are targeting transgender women and insisting that these women who want to participate are men.

After Gov. Noem announced a partial veto for the trans sports bill the discussion on whether it protects or harms women in athletics is still ongoing.