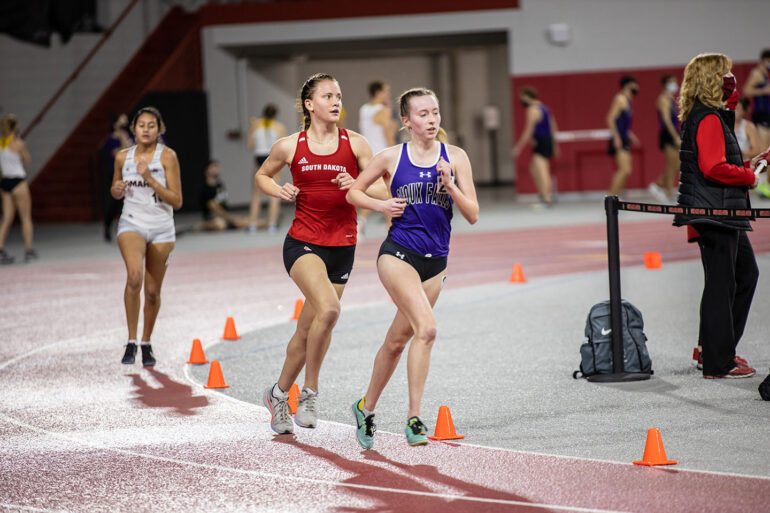 USD’s track and field teams competed and won multiple events on both the men’s and women’s side in the Sioux City Relays Friday held at Elwood Olsen Stadium.

Anderson won the high jump event and set a new Sioux City Relays record after clearing a height of 7 feet ¼ inch. This meet record comes just one week after Anderson cleared the Olympic qualifying standard of 7 feet 5 inches in the South Dakota Challenge.

Another meet record was broke by USD’s Jonna Bart, who recorded a time of 10:36.31 in the 3,000-meter steeplechase. Bart crossed the finish line 47 seconds before the second-place finisher in Friday’s race and broke the previous meet record set by Augustana’s Kyle Blakeslee by more than 5 seconds.

USD Freshman Erin Kinney placed first in the women’s 100-meter dash. Kinney also led off for the Coyotes 4×100 meter relay that won the event with a time of 47.51 seconds. Freshman Sarah Reifenrath anchored the winning 4×100 relay team and captured an individual title in the 200-meter dash.

On the men’s side, the Coyotes finished top three in the 100-meter dash. Freshman Ardell Inlay won the event and clocked a winning time of 10.77, while teammates Dylan Kautz finished second, and Virgil Steward finished third. Demar Francis won the 200-meter dash for the Coyotes, running across the line in 21.64 seconds.

The Coyote men also swept the hurdle events at the Sioux City Relays. Redshirt-freshman Hugo Morvan won the 110-meter hurdles with a time of 14.45 seconds. Zach Renken clocked a time of 54.90 to win the 400-meter hurdles.

USD track and field teams will be back in action this Wednesday for the USD Twilight meet. The meet is scheduled to kick off at 3 p.m. at Lillibridge Track Complex.