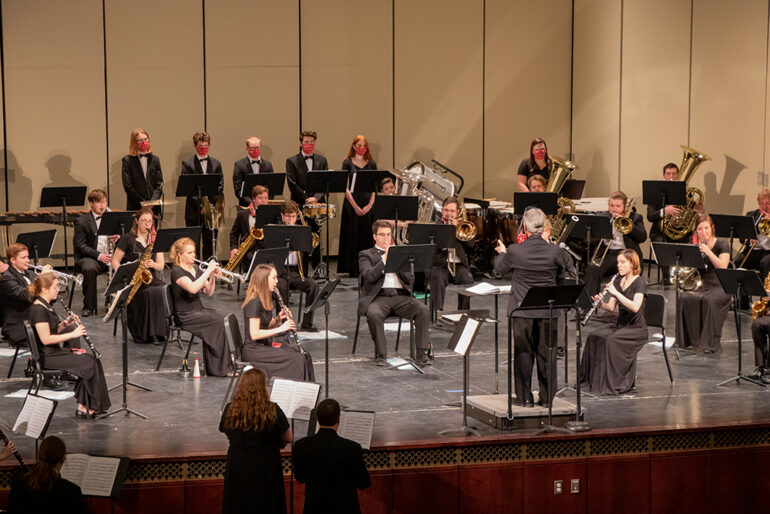 Campus
USD's Symphonic band performed via livestream on April 18. With over 45 musicians, the group had to social distance and get creative with how the performers were placed on the stage. Bennett Clary | The Volante

As with all things, COVID-19 has also affected the band. Live streaming is not new to musicians. In the past years, the Symphonic band has streamed its events and concerts, so families of players can attend, even if they don’t have the ability to travel to Vermillion.

John LaCognata is the Symphonic band’s conductor, as well as the applied lessons instructor for trumpet players.

“We look for the silver lining in COVID, and one of the benefits is that we have been able to develop new means of communication,” LaCognata said. “I hope that the live stream of our recitals, concerts and events continues well beyond COVID.”

The music department has put in safety restrictions to aid in the prevention of COVID.

Other protocols include masks, bell covers while playing, and six-foot spacing between people.

There are over 45 musicians who play in the Symphonic band. Stages are not built for that many people with all their instruments and equipment. Musicians will be at the back of the stage and some will even be behind the conductor on the house floor. It will be like the musicians are circling their conductor.

“It’s challenging for the musicians because we are so spread out, but the students have adapted well and are doing a good job,” LaCognata said

Featured in this concert is USD freshman clarinetist Olivia Gulseth. With the band, she performed the first piece of Carl Weber’s Second Concerto for Clarinet. Olivia is the third winner of the band’s annual solo competition.

The competition is open to ensemble members studying with one of USD’s applied winds and percussion faculty members. The competition took place in February and the band and Gulseth have been practicing in preparation since.

“I did it as an experience just to do something and work on a project. I ended up winning and it was kind of a surprise,” Gulseth said.

The program included various pieces of work, some of which include “George Washington Bridge” by William Schumann and part one of “American Dances” by Alfred Reed. With the large selection of work, the band has been working tirelessly to perfect their rendition of the music.

Both LaCognata and Gulseth believe the band is ready to perform their selections to their audience. They have been practicing and are prepared.