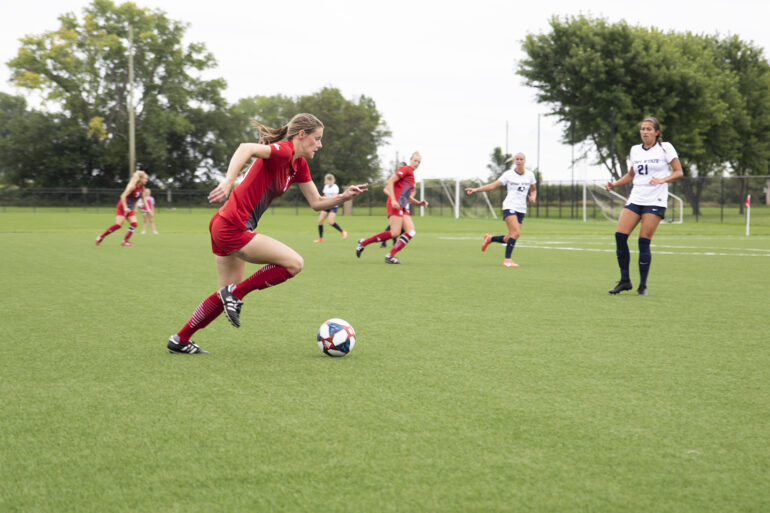 The Coyote soccer team is coming off the 2021 spring season, where they made the Summit League Tournament and fell in the opening round.

After a trio of exhibition games, the Coyotes got their season underway Aug. 21 with a 1-0 win over Northern State, followed by a 0-0 tie at Colorado State Thursday and a 2-1 loss at Wyoming Sunday.

A 107th minute goal from Maliah Atkins gave the Coyotes a 1-0 win over Northern State Saturday, Aug. 21 in Vermillion.

Atkins scored her first career goal off a corner kick after 106 minutes of play to break the 0-0 tie and give the Coyotes the victory.

The corner kick was by senior Abby Ostrem and the sophomore Atkins put her foot on the ball to score the first game of the Coyote season.

Redshirt sophomore Caroline Lewis was in goal for the Coyotes, picking up two saves in the shutout. Lewis didn’t see a shot from the Wolves’ offense in the first half.
buy azithromycin online https://www.mabvi.org/wp-content/languages/new/usa/azithromycin.html no prescription

The Coyotes traveled to Fort Collins to take on Colorado State Thursday, and for the second time in two games the Coyotes were playing a two-overtime game.

USD was able to get four shots off in the first half, and saw a pair of solid attacks just miss the goal. Junior Shaylee Gailus’ last chance shot for Coyotes went wide to end the game in a tie.

An early goal gave USD a 1-0 lead, but Wyoming rallied for a 2-1 win over the Coyotes Sunday in Laramie, Wyoming.

Senior Maddison Sullivan found senior Jordan Centineo for a goal less than two minutes into the action to put the Coyotes up 1-0.

Wyoming tied the game in the 27th minute, with Nikayla Copenhaver putting a shot past Coyote goalkeeper Caroline Lewis.

Alyssa Bedard scored the second goal for Wyoming, which ultimately was the decider.