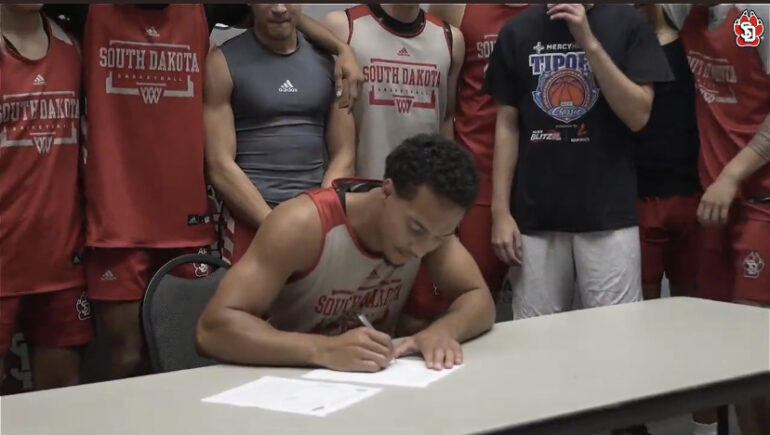 From his childhood dream in Mankato, Minnesota to going to Rapid City to play as a Miner and now in Vermillion as a member of the USD men’s basketball team, basketball has been in Damani Hayes’ life.

Hayes, a redshirt-senior, has received a full-ride scholarship at USD. It did not come easily for Hayes, however. Coming from the South Dakota School of Mines, Hayes was a walk-on at USD.

The challenge came quickly for Hayes last season, having to practice against Stanley Umude, a former Coyote who is now playing for Arkansas. While Hayes kept battling, he says that he loves it at the same time.

On Sept. 1, Hayes was offered a scholarship after not holding one last year with the Coyotes. After his dedication and improvement on the court last season, Hayes’ childhood dream came true with the acceptance of his scholarship.

“Coach Lee was the one who told me it was an individual meeting and truthfully… it’s a goal that I had been dreaming about since I was a little kid,” Hayes said. “Obviously I put a lot of work behind and at first it was disbelief and then that overwhelming joy, pride and what I had done at that moment.”

After he received the scholarship, Hayes now has time to reflect on himself as a teammate and as a basketball player.

“One thing this year I wanted to focus on is to lead by example in the sense of bringing a ton of energy to practice, being ready to go hard in drills,” Hayes said.

Hayes also believes that with the team’s hard work and dedication, they could do something great this year.

“I’m just excited to see how we all mesh this year,” Hayes said. “We have a lot of people that can contribute and are going to contribute. I think that makes us tough to guard and tough to play against.”

Even with the scholarship, Hayes does not shy away from showing his gratitude for basketball.

“I’m extremely grateful for the coachers, my teammates who’ve been around,” Hayes said. “Nothing has changed, we’re going to continue to work hard and I’m going to try and be the best teammate I can be.”