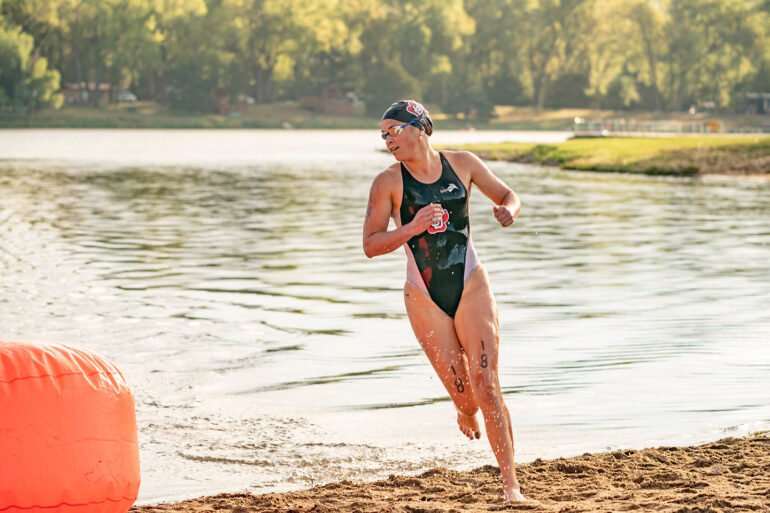 The South Dakota triathlon team competed in the Pleasant Prairie Qualifier over the weekend. Due to a limited squad competing, the team only scored individually and not as a team.

The Coyotes raced against a loaded field of Arizona State, San Francisco, Denver and East Tennessee. The invite served as a good chance to scope out the field before nationals this fall, Kubas said.

“Individually I was content but I wouldn’t say happy with my performance”, Kubas said. “I felt really good in the water and then the bike leg was really tough. We had a small pack ,so we all had to work really hard. Ending it off, my run did not reflect my training, but I know the areas needed to improve.”

However, Kubas, who is team captain, said she was excited for the freshmen at their first collegiate race.

“I was proud of everyone’s individual efforts though and for the freshman to have a solid college debut,” Kubas said.

Head Coach Kyle Joplin attributed the team’s weekend performance to the training the team has been doing the last few weeks.

“I think having a really dedicated group, in general, really makes you want to be better because if someone’s having a better day than you, you’re obviously happy for them, and we all do the same training, so it’s just really good to see people excel and kind of get to push each other,” Joplin said.

Joplin also said the team is mixing it up in terms of races this fall with some girls traveling to different triathlons and others staying near Vermillion to race as members of the swim team and cross country team, respectively.

“We have some different things that we’re doing this year, we have some girls that will be in the Red and White meet with the swim team,” Joplin said. “(Senior Maddie Lavin ran) in a cross country meet (last) weekend. The race we’re doing in Arizona in a couple of weeks is going to be a different format for us. We’re actually doing an invitational with ASU and the University of San Francisco, and we’re doing time trials. So instead of actually doing a triathlon, we’re doing a 3k time trial run, 100m and 400m in the swim, and then a team time trial on the bike. So that’s going to be a new format for us, it’s something that should be fun and a good experience for the girls. The end goal for everything we’re doing is getting ready for Nationals in November.”

Leading the team to Nationals this fall are four seniors who make up the team’s first graduating class. Leah Drengenberg led the team to its second runner-up finish and scored third individually at nationals in 2019. Payton Ryz, Sammy Whitting and Lavin will look to compete at their last national collegiate race alongside Drengenberg.

“The girls have turned into great leaders on the team in different ways, but each person has a thing that they’re responsible for and we’re expecting pretty big things from them this year,” Joplin said. “I think all four have a shot of making our team for Nationals, which for them is a pretty big deal… so, it was a very good recruiting class for us. They built the team here at USD.”

The Coyote’s next race is the Arizona State Invitational in Tempe Sept. 18, which will serve as a Nationals meet preview.

Apr 25th, 202249
Sophomore health sciences major Stella Fairbanks had a productive diving season after she was named the...
Softball

Apr 25th, 202229
The Coyote softball team got their conference season started over the weekend, taking two of three games...
May 10th 12:47 PM
Campus