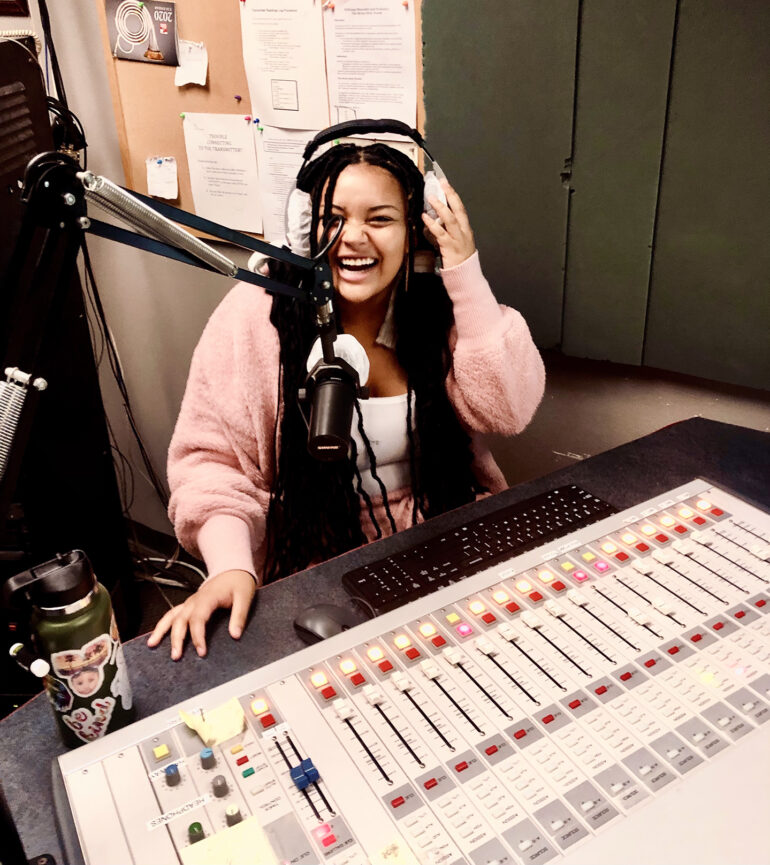 Feature
Zayda Abbott uses her witchcraft to connect with her ancestors and to help with her anxieties about existence. Submitted | The Volante

Born after her biological father passed away, Freshman Zadya Abbott has lead a life different from the start. Additionally, Abbott is part of a Vermillion-established coven, The Witches of Elm Street.

Abbott was introduced to her coven over a year-and-a-half ago by her sister. Abbott said that her family was originally raised Catholic when she was younger.

“Religion was never something that we didn’t have in my family. My mom was very open when it came to decisions about our spirituality. So, a lot of my siblings have different spiritualities and beliefs. My sister is Jewish, but me and my other sister are both witches,” Abbott said.

Abbott said that every member has their own spellbook filled with both personal spells and coven-approved spells. She said the coven has special events on equinoxes and full moons for charging crystals, along with performing other spells.

“It’s not like what people read about with the Salem witch-hunt-type situation, because that’s rooted in sexism. This is actual witchcraft, and as a brown woman, witchcraft is a lot about connecting back to the version of my ancestral beliefs that weren’t colonized,” Abbott said.

Abbott said the main aspect of being in a coven is about connecting and sharing energy with the rest of the coven. If someone needs more energy to be sent to them, she said they can call on the rest of the members to send them energy.

Abbott said witchcraft helped her realize just how powerful she was. She said belonging to her coven brings her safety in knowing that she belongs to something that supersedes the fakeness that sometimes surrounds this world.

“Personally, witchcraft in general connects me with my ancestors. But it’s just like when every day people go to Sunday church. For me, just like others, I use my spells to help with my anxieties about existence,” Abbott said.

Leadership within covens are split between Supremes and Superbs, Abbott said. One Supreme leads her coven and one Superb acts as the second in charge. Everyone else follows as active members of the coven, Abbott said. She said there is a certain spell that has to be performed to activate one’s powers within the coven.

“I know that 30 people have their powers activated but I wouldn’t say that all 30 of us are fully active all the time,” Abbott said.

Abbott said she performs her spells at her family house altar, and that numbers play a very big role when casting a spell. She said she does a lot of protection spells, safe travel spells and crystal charging.

“Typically, when it comes to spells and writing spell books, you usually want to know how many times each repeats and how the numbers work, which pattern of numbers you want to use, because they usually come in sets of three, seven and nine,” Abbott said.

Not only is Abbott in a coven, she was also born six years after her father’s death date. Abbott’s mother used artificial insemination to have Abbott along with her three younger siblings. Abbott’s father passed away Nov. 19, 1996 while Abbott was born Nov. 29, 2001. Abbott said she is close with her father’s side of the family even though she never got the chance to meet him.

Abbott said being born after her father’s death and belonging to The Witches of Elm Street does not affect her life at USD.

“I strive for success, but success for me is not necessarily your typical traditional understanding. I want to feel everything that I can feel because it’s my goal in life to exist fully and genuinely as possible, and none of those things will stop me from doing that.” Abbott said.