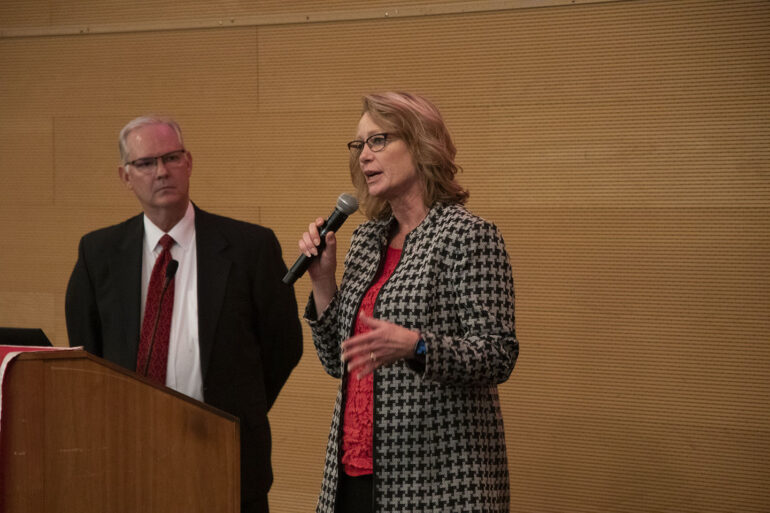 Campus
President Shelia Gestring spoke at the Senate Bill 55 listening session Thursday night in the MUC Ballroom. Gestring also fielded questions about the Opportunity Center and the future of the Center for Diversity and Community.

The South Dakota Board of Regents’ (SDBOR) Senate Bill 55 (SB 55) Task Force came to USD Oct. 14 to present the BOR’s strategies for addressing the bill’s charges to students and faculty.

SB 55 is “An Act to require the Board of Regents to assemble a task force to study the operations and functions of the institutions of higher education under the board’s authority,” according to the language in the bill. The bill charges the task force to examine nine areas of university operations. The bill can be found at www.sdbor.edu/SB55TaskForce/Documents/Senate-Bill-55.pdf.

Executive Director of the SDBOR Brian Maher and a panel of other Regents presented the task force’s findings. Maher discussed each area that SB 55 focuses on and how it will impact USD’s campus in the future.

After both presentations, students and faculty were able to ask questions about SB 55. Participants were concerned with Title IX, green building standards and the reassessment of the minimum number of students for course enrollment, among other topics.

After the first round of questions, the Task Force opened the discussion to general questions about SDBOR activities. Students and faculty used this opportunity to discuss the “Opportunity for All” statement, the planned Opportunity Centers and the fate of USD’s Center for Diversity and Community (CDC).

Maher clarified that SB 55 is separate and distinct from the Opportunity Centers, and said that the only overlap between the two was timing. He said the “Opportunity for All” statement came out of a national conversation that was held in the spring.

When questioned about the national conversation that happened in the spring, Maher was unable to provide specifics.

“All I would say is the conversations that I talked about earlier where we had members of the board, as well as presidents of our institutions, and we had a think tank on how should we address this topic,” Maher said.

Gestring responded to concerns that the CDC director position hasn’t been filled yet. She said the position was being withheld as the university continues to work through the establishment of the Opportunity Center.

Gestring said there’s a misunderstanding about something being taken away once the Opportunity Center is implemented.

May 10th, 202273
This is the ninth and final installment of a series recording the experiences of students and faculty...