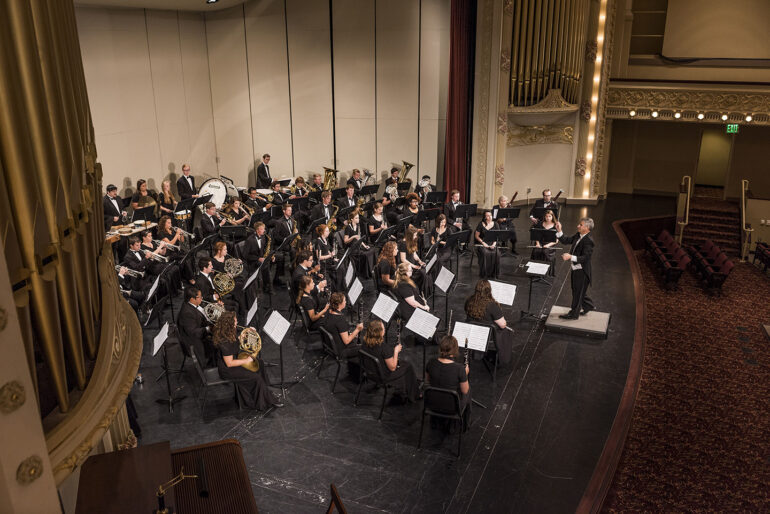 Events
The USD bands are showcasing their first concert of the year with a variety of music styles. Miles Amende | The Volante

The University of South Dakota bands are set to showcase their musical abilities at their first concert of the year Oct. 7 with jazz, marches, film music and more.

The Jazz Ensemble I, The Sound of USD marching band and the USD Symphonic Band will perform a variety of music throughout the evening. The bands will be conducted by Christopher Kocher, Todd Cranson and John LaCognata, respectively.

LaCognata, an assistant professor of music and director of the Symphonic Band, said the performance has a lot of variety, and is meant to represent all of the bands and their work.

“I know Dr. Kocher’s got a wonderful program set up with the Jazz Ensemble… and of course the marching band, when we bring the marching band from the dome to indoors, it’s pretty powerful in there, and that’s always a lot of fun,” LaCognata said. “They won’t perform on stage, they’ll perform in the aisles, kind of surrounding the audience with the drumline in the front, and then we put the color guard in that for those on the stage, so it’s really just a fun night, a fun night to see three different types of bands.”

Some of the pieces include “On Green Dolphin Street” by the Jazz Ensemble, an arrangement from “Star Wars: The Force Awakens” by The Sound of USD and “The Free Lance March”—a John Philip Sousa piece—by the Symphonic Band.

Kate Huntimer, a flautist and piccoloist, plays in both the marching band and the symphonic band. She said she looks forward to the band showcase because of all the different styles that are on display.

“Jazz is jazz, the marching band (is) fun and peppy, and then symphonic band, we play band literature,” Huntimer said. “I always look forward to it because it’s fun. You get a little taste of what goes on music-wise on campus.”

The show will end with the piece “God of our Fathers,” which the bands traditionally play to close every year’s showcase concert. LaCognata said all three bands will perform the piece.

“The symphonic band starts on stage and plays three-quarters of the piece. And then there’s a moment in the middle of the piece where we bring the rest of the ensemble in on the chorale, and then we kind of finish it, so it’s really kind of a fun way to end the concert,” LaCognata said.

The concert takes place Oct. 7 at 7:30 p.m. in Aalfs Auditorium. The event is free and open to the public.