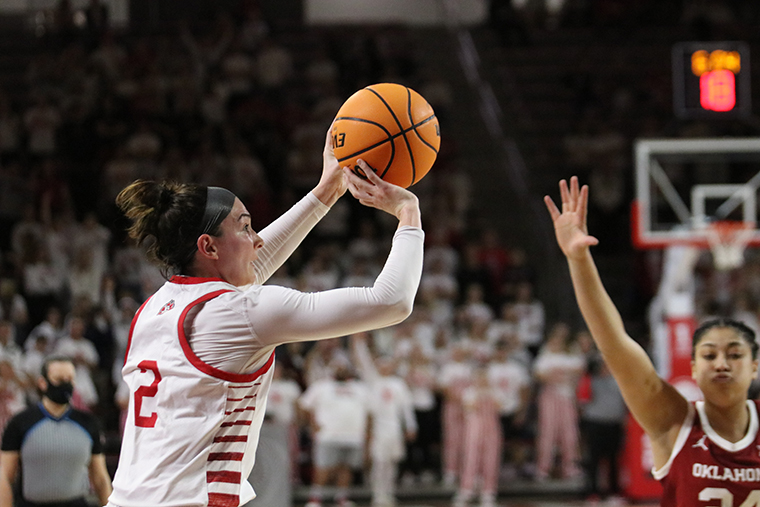 The Coyote women’s basketball team took flight this Thanksgiving and ended up on the island of St. Thomas in the U.S Virgin Islands to play in the Paradise Jam.

The Paradise Jam consisted of two-round robin tournament. The Island Tournament consisted of Arizona, DePual, Rutgers and Vanderbilt. The Coyotes played in the Reef Tournament, which consisted of Northwestern, Pitt and Texas A&M.

The Coyotes came into the tournament with a 2-2 record on a two-game winning streak.

South Dakota’s first game was against Northwestern on Thanksgiving Day, where they fell 73-57. The Wildcats went into half-time with a 31-23 lead, but the Coyotes fought back with a 20-point third quarter to bring them back in the game 45-43.

However, Northwestern turned up their scoring in the fourth quarter, where they put up 28 points compared to the Coyotes’ 14.

In the game, the Coyotes only had two players reach double figures in Chloe Lamb (25) and Hannah Sjerven (13). For Northwestern, they had four players reach that mark, with Caileigh Walsh being their leading scorer with 20.

The Coyotes did, however, shoot better from three-point range, hitting 45% compared to the Wildcats’ 42%.

The second game for the Coyotes was against Texas A&M Friday, Nov 26. Texas A&M had won their first game against the Pitt Panthers Thursday 57-46.

The Aggies took down the Coyotes 58-44 coming back after being down at half-time. South Dakota led Texas A&M 30-21 at halftime, but the Aggies had a 24-quarter and only allowed the Coyotes 2 points in the quarter.

Liv Korngable led the Coyotes in scoring with 11 points, shooting 4-12 from field goal range. Sjerven was the Coyotes’ second leading scorer with 10, but she also grabbed six rebounds and had two blocks.

For the Aggies, Kayla Wells led with 20 points, shooting a perfect 4-4 from the free-throw line.

The Coyotes’ final game was against the Pitt Panthers. The Panthers came into the game 1-1 in the tournament after they defeated Northwestern on Friday 72-60.

The Coyotes defeated the Panthers 72-61 in overtime. This is the Coyotes’ first win over an ACC school in USD history.

The Coyotes trailed 28-22 going into half time but scored 22 points in the third quarter alone. Both teams tied in points in the fourth quarter in total points with 12 each. The Coyotes outscored the Panthers 16-5, giving them their first win of the Paradise Jam tournament.

Lamb led both teams in scoring, with 30 shooting 12-23 from the field. With those 30 points, Lamb has broken her career high of 29 points.

Natalie Mazurek also had a career day against Pitt. She had 10 points along with grabbing six rebounds, both being new careers highs.

The Panthers were led by Dayshanette Harris with 18. Harris came off the bench for the Panthers, playing 22 minutes in the game.

Lamb was named to the Paradise Jam’s All-Tournament Team, where she averaged 20.7 points through the three games. She also shot 50% from the field and 43.5% from deep.

South Dakota finished the tournament with a 3-4 overall record, with their next game being Dec. 4 against the Wichita State Shockers at the Sanford Coyote Sports Center.