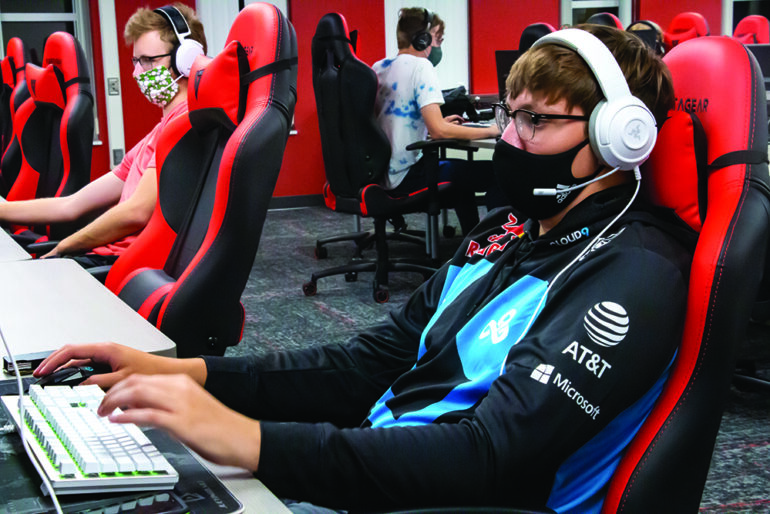 Campus
The USD Esports team is competing in another Twitter competition for $15,000. The competition is sponsored by Learfield, the sports marketing company who manages Coyote Sports Properties.

This semester, the USD Esports club is once again participating in a Twitter competition for a chance at $15,000.

The competition, sponsored by Learfield, the sports marketing company who manages Coyote Sports Properties, centers around the promotion of esports athletes on Twitter. For this contest, USD Esports is following Jackson Crist as he progresses through the LevelNext Madden National Championship.

Aaron Rimolde, president of USD Esports, said the competition runs for the duration of the tournament. Every time the club tweets from the account with the hashtag #LevelNextMadden, they get five points. Every like is one point, every comment is one point, and every retweet is two points.

“We do lots of promotions with that. We’ve been trying to get some photos posted of him, even including when he’s shown up to other events in the club, like our Halloween one,” Rimolde said. “It’s a lot of trying to get as many relevant things as we can out on the socials so that people have a lot to interact with.”

Though Crist lost his Monday night match against Grand Canyon University 24-21, bringing the club’s Madden season to a close, the club can still participate in and potentially win the Twitter competition.

As of Tuesday, USD is currently in fourth place with 3,696 points.

The club participated in and won the same competition last year, also with Crist competing in a Madden tournament. Crist said the club received massive support from the university for last year’s competition, and that this year has been much the same.

“Just (Monday), the South Dakota Athletics verified Twitter account tweeted something about it,” Crist said. “It’s cool seeing all the different people retweeting, liking, supporting, and you see a lot of the same people showing support.”

“We still have around 10,000 of it just saved up. (We’re) kind of trying to figure out what exactly we want that to go toward, but it’s really just going to give us opportunities to purchase equipment that we don’t necessarily have the funding for directly from the school,” Rimolde said.

“I’m on scholarship right now to play Madden, which is pretty crazy to think about,” Crist said.

Assistant Director of Intramurals and Sport Clubs Connor Singhisen, who serves as advisor for USD Esports, said any time a student organization or club has the opportunity to compete for money, he encourages them to do so.

“Clubs have a finite amount of money allocated to them by SGA through student fees, and competitions like these give clubs an opportunity to build brand awareness, develop fans and followers, and put their club in a better financial position to increase longevity and success,” Singhisen said in an email interview with The Volante.

Singhisen said the competition gives the club an opportunity to gain followers and fans, and to increase awareness about the club’s activities both on campus and in the digital community. He said competitions like this help esports to grow, and he hopes that the NCAA will eventually follow suit with the NAIA and officially sponsor collegiate esports.

For those looking to support USD Esports in the competition, the club can be found at @SDCoyoteEsports on Twitter.