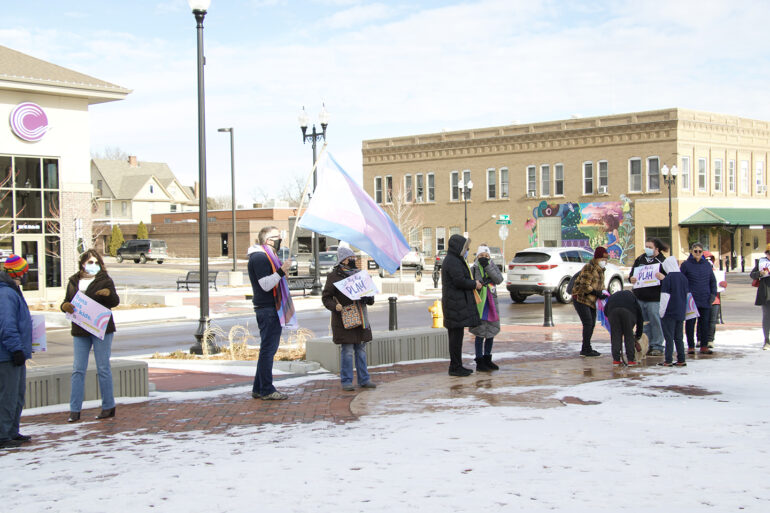 The Vermillion Protect Trans Kids Rally was held on Jan. 16 at the Platz. The event was hosted by the South Dakota Transformation Project Trans Advocacy Program calling to protect trans people amidst new South Dakota legislation of HB 1005, HB 1006 and SB 46.

The event was a collaborative statewide effort by the ACLU of South Dakota, Transformation Project Advocacy Network, Human Rights Campaign and a few other organizations. They hosted multiple rallies across the state including ones in Sioux Falls, Rapid City and Aberdeen.

Mike Phelan, owner and manager of Outside of a Dog Books & Games, helped host the Vermillion event and was one of six speakers. These speakers shared personal stories and prepared speeches in opposition to the bills.

“This is about letting trans people know that they have the support of their community here in Vermillion and letting our legislators know that we want them to oppose anti-trans legislation,” Phelan said.

Graduate student Mason “Beanie” Luttig also spoke at the rally to share his story as a trans athlete. Luttig said he has been checked physically at softball tournaments and even been asked to show his birth certificate.

“It’s really frustrating as an athlete and I know growing up, we just want to play sports because there’s no escape and it’s a good way for us to burn off energy and be able to be successful because we get taught how to be good teammates, we get taught to be good leaders and how to guide other people in the community,” Luttig said.

Phelan said that trans people often just want to be left alone to live their lives, but are instead misunderstood or mistreated by those who don’t support them.

“A couple of our speakers today mentioned that there are bad mental health outcomes associated with discrimination towards trans and LGBTQ+ people and we want those individuals to know that there are resources available, that your community supports you and that there is a lot of love here in Vermillion,” Phelan said.