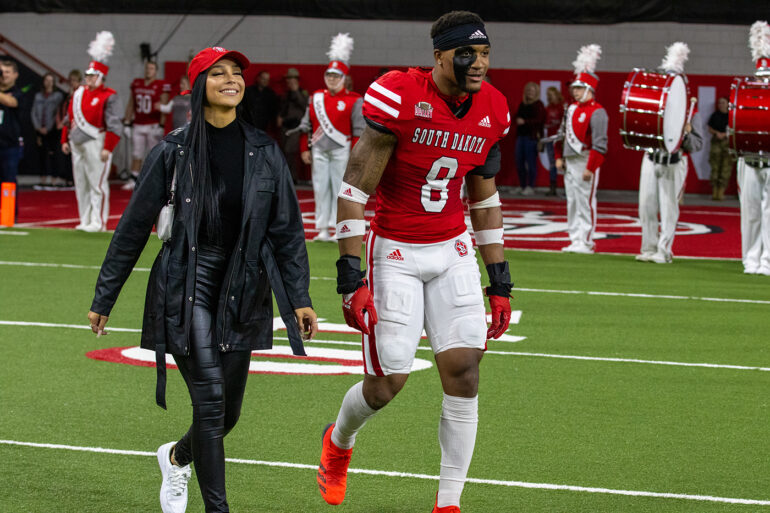 With one year of eligibility remaining due to COVID-19, linebacker DeJaun Cooper made the transition from a Hawk to a Coyote.

The Maryland native played football for four years at Monmouth University in New Jersey where he graduated with a degree in graphic design.

After the NCAA announced that athletes would receive an extra year of eligibility, Cooper committed to USD June 4, 2021. Cooper said this year as a Coyote was a blessing and an experience he really needed.

As his time playing in the DakotaDome came to an end, Cooper began thinking about what his future would look like and decided he wasn’t ready to give up football, making the decision to declare for the NFL draft.

“It has always been a goal of mine,” Cooper said. “Just watching football all of the time and dreaming of myself being in that position is something that definitely crossed my mind from time to time.”

Cooper said he started playing organized football in 2008 with the best youth football organization in Maryland, the Montgomery Village Chiefs. He then went on to play as an outside linebacker at his high school, Northwest High School, where he recorded over 70 tackles and 8.5 sacks in 2016 and was named U-19 First Team All-LB at the USA Championships.

In his last season as a Monmouth Hawk, Cooper saw starts in all 13 games and finished the season as the team’s sixth-leading tackler, amounting 46 tackles.

Now with his collegiate football career being complete, Cooper is spending all of his time preparing and practicing for the NFL draft.

“Right now, I am currently training in Arizona,” Cooper said. “I am training at Apex Facility Performance Center in Mesa. (I am) trying to take care of my body with recovery and meals so I can be in the best shape possible come pro day.”

A college pro day is an event for college football players to undergo various individual drills that allow them to showcase their skills in front of talent evaluators.

Cooper said much of his desire to play football professionally came from his lifelong dreams of being that athlete he grew up watching on tv, but as he continued playing college football, another reason for making it to the NFL emerged.

“Playing five years of Division I football versus some of the top competition in the FCS was fun and a blessing so that was a reason as well for me to declare for the draft,” Cooper said.