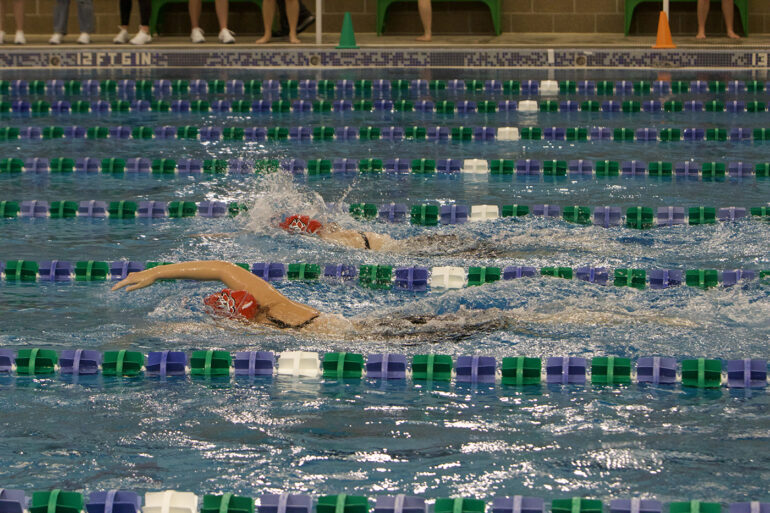 On day one, the Coyotes competed in 14 swimming events where they placed in every single event.

Senior swimmer Cassie Ketterling took home the win in the 100 butterfly with a time of 57:38. The other individual winner was freshman swimmer Sara Mayer. She took the 50 freestyle with a time of 24:21.

Mayer was also a part of a four person 400 medley relay team with senior Isabel Fairbanks, freshman Emily Kahn and senior Delaney Kottke, where they collectively put up a time of 3:58.26 which allowed them to capture the win.

Senior Meghan Atwell, freshman Shanon Banark, freshman Christina Spomer and Kottke competed in the 200 free relay, where they took a win with a time of 1:38.79.

The last group that grabbed a win on the first day was the group of junior Aidan Gantenbein and seniors Jack Leichner, Brady Torborg and Jacob Wong. They competed in the 200 free relay and put up a time of 1:24.46.

The first two of the women were divers Naomi Bingham and Kayla Middaugh. Senior Bingham dove her way to first in the one meter diving event and sophomore Middaugh was first in the three meter.

Freshman Mairead Powers took home another 400 IM clocking in with a time of 4:42.61. This was Powers’ third 400 IM victory of the season. Kahn also grabbed herself another win over the weekend winning the 100 free. That was her sixth time this season.

Coyotes also had two winners in the 1650 freestyles. The first was sophomore Maddie Grant who was competing for the first time in this event. She had a time of 18:00.97. Sophomore Carter Anderson grabbed the second win with his time of 16:48.62.

The Coyotes scored the most points out of all five schools scoring 544.4 points. SDSU came in second with 532.5 points which was followed by Omaha, IC and ILCC.

With this event concluded, it ends the Coyotes regular season. They will have a couple of weeks off before they head up north and compete in the Summit League Championships in Fargo, North Dakota on Feb. 16.