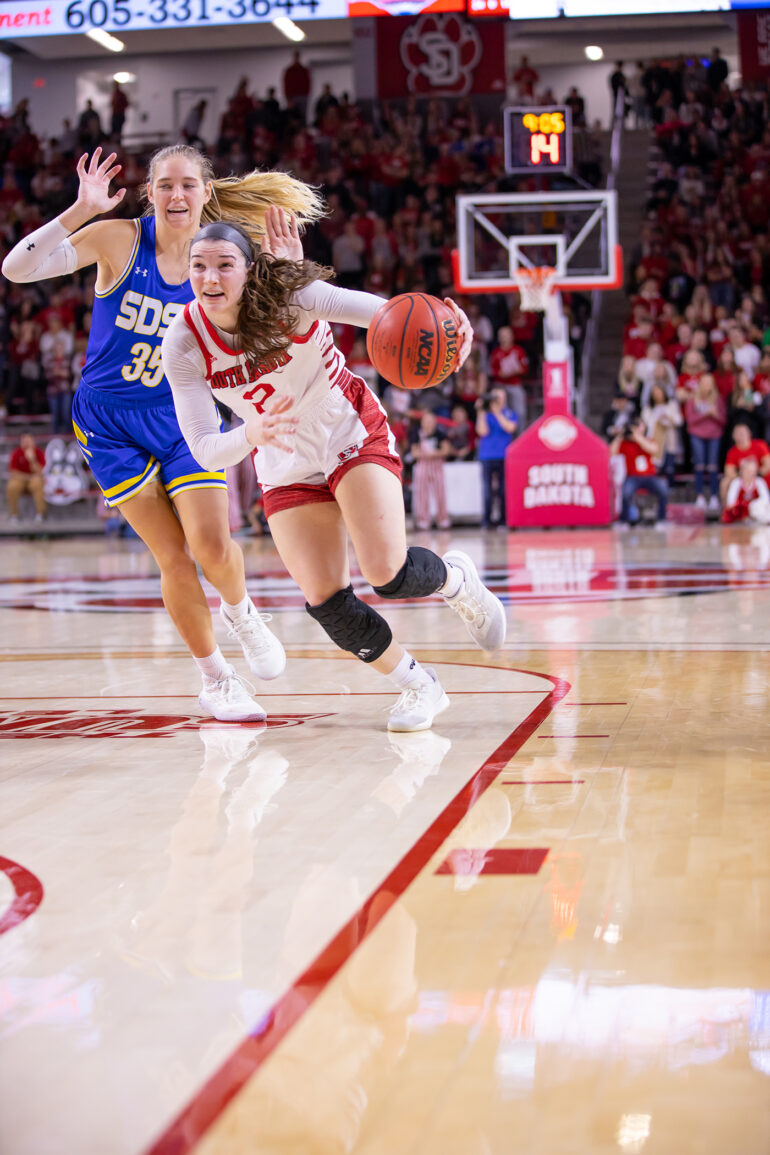 Both USD basketball teams will be taking on in-state rival South Dakota State (SDSU) this week. The women’s team will take on the Jackrabbits in Brookings, while the men compete in the Sanford Coyote Sports Center (SCSC).

In their last meeting on Jan. 8, the women took down the Jackrabbits 65-42. Senior guard Liv Korngable was the Coyotes’ leading scorer with 15 points. Senior center Hannah Sjerven contributed on the defensive end having four blocks and three steals. On the Jackrabbits side, sophomore forward Tori Nelson lead them in scoring with nine points in only 18 minutes.

Both teams are currently on winning streaks. The Coyotes have won the last 16 games and the Jackrabbits the last six games. They are also both ranked in the CollegeInsider.com Mid-Major Poll with USD being No. 7 and SDSU being No. 20.

Senior guard Chloe Lamb has been named to the Becky Hammon Award Midseason Watch List. She is one of 15 collegiate women players nationwide to be selected.

When the men’s team took on the in-state rivals on Jan. 8, SDSU took the win in Brookings with a final score of 84-65. SDSU freshman guard Zeke Mayo was the game’s leading scorer with 21 points. He shot 5/6 from 3-point range and 7/10 overall from the field. Senior guard Mason Archambault lead the Coyotes in scoring with 16 points. He also contributed on the defensive side of the ball with two steals.

SDSU has one of the top scoring offenses in the nation, according to the NCAA. On average, they score 87.7 points per game which is second place to Gonzaga. Sophomore guard Baylor Scheierman is one of the top defensive rebounders in the NCAA. He is currently averaging 8.04 rebounds, which is seventh in the nation. He also has nine double-doubles this season which makes him tied for No. 19.

Archambault is also on one the NCAA top lists. He is currently shooting 92.86% from the free-throw line this season which puts him at No. 5 in free-throw percentage in the NCAA. He also sits tied for No. 28 in free throws made with 98 on the season.

The SD Corn Showdown keeps track of the overall matchups between the rivalry programs. USD is currently in the lead with six points to SDSU’s three. The Coyotes have beat the Jackrabbits in both volleyball matches, women’s soccer, men’s football and women’s basketball. Jackrabbits have won in both men’s and women’s cross country along with men’s basketball. The winner at the end of the 2021-22 school year gets the SD Corn Showdown Trophy.

The next two match-ups between the SD universities will take place on Feb. 5. The women’s game will be in Brookings at 2 p.m. and the men’s will be held in Vermillion at 7 p.m.