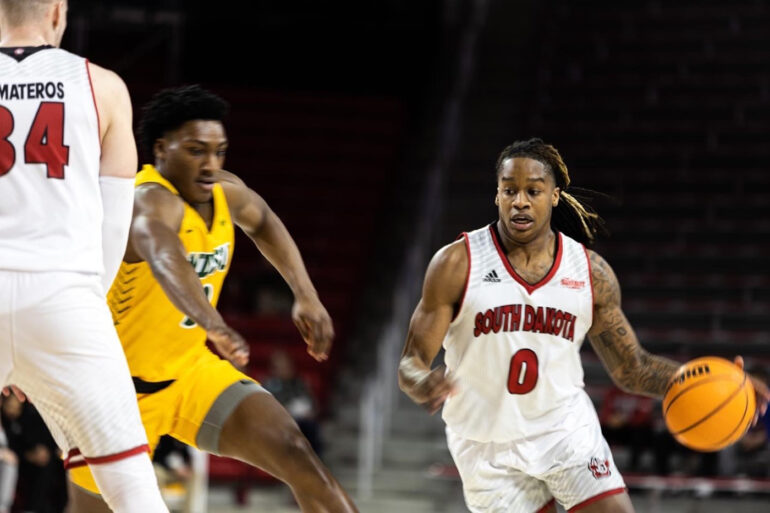 The Coyotes split last week’s games against the North Dakota teams. In a tightly matched competition against Summit League rivals North Dakota State University (NDSU) on Jan. 27, the men’s team eventually fell to the Bison in overtime, 74-62. They then played University of North Dakota (UND) on Jan. 29, where the Coyotes beat the Fighting Hawks with a final score of 71-58.

USD Athletics handed out 300 custom lightsabers to students in attendance for Thursday night’s game against the Bison. During the Star Wars themed game, the nearly 2,000 fans in attendance watched as NDSU cinched their title as the third place team in the Summit League.

Neither team was able to lead by more than four points throughout the contest. Sophomore guard Kruz Perrott-Hunt led the Coyotes in scoring by putting up 24 points.

With the score stalled at 60-60, the Coyotes had a chance to win with a buzzer-beater made by sophomore forward Tasos Kamateros. However, after video replay it was ruled that the ball hadn’t left Kamateros’ palm before the game clock expired, thus sending the game into overtime.

In overtime, the Coyotes lost 74-62. The Bison will host the rematch in Fargo on Feb. 7 in a make-up game after the first game was postponed due to COVID-19 protocols.

Saturday saw the Coyotes take on the UND Fighting Hawks. The Fighting Hawks are currently last in the Summit League standings and came into this game with an overall record of 4-18.

The Coyotes got an early lead, finishing the first half with a score of 39-18.

In the second half, the Coyotes won by 13, and maintained their fourth place position in the Summit League standings.

In the match-up against UND, another Coyote reached a season-high point total. Kamateros scored 21 points while shooting 42% from the field. He also grabbed a season-high of 12 rebounds securing his second double-double in three games.

The Coyotes play at home again on Feb. 7 against the number one ranked team in the Summit League, the South Dakota State Jackrabbits. The last time these teams met, the Coyotes fell to the in-state rival 84-65.