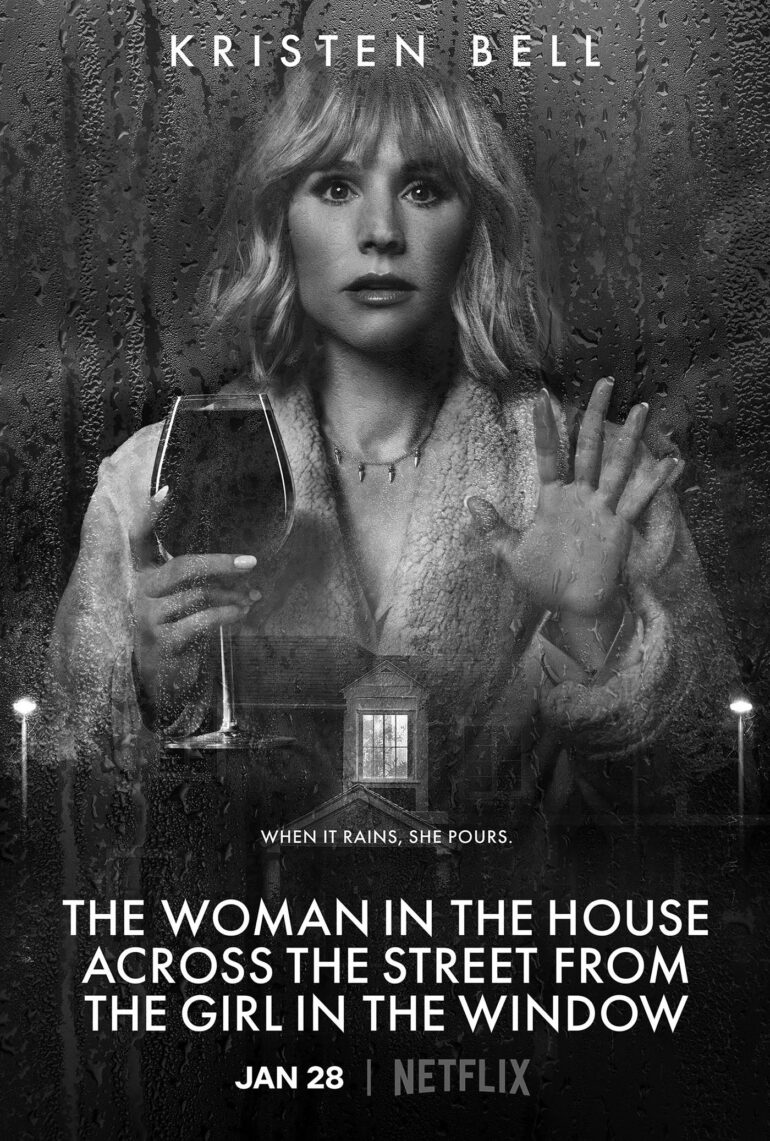 Kristen Bell stars in a new dark comedy parodying the movie “The Woman in the Window.” It started its first ongoing joke by titling the show “The Woman in the House Across the Street from the Girl in the Window” to make fun of long titles in mysteries. The show was released on Jan. 28 on Netflix and as of Jan. 30, has reached the number one spot on the Top Ten in the U.S. list.

The long-titled show follows Bell’s character, Anna, living alone and spending her days drinking wine and watching her neighbors live out their lives. Anna’s life has become a daze from her recent tragedy with her family, leaving her with loss of time and memories. On a usual night of watching the new neighbors and drinking wine, Anna sees her neighbor murdered, but once sobered up is told the opposite. Refusing to believe that what she saw was just a hallucination, Anna goes on a journey of trying to solve the murder of her neighbor.

Bell being the lead of a dark comedy is what sold me on watching this show. Bell is a natural when it comes to comedy as prevalent from her work being mostly comedic pieces. Since “The Good Place” ended I was looking forward to the next clever comedy Bell would lead, so maybe with the high standards and excellent premise of “The Good Place,” this show was a little bit of a let down.

The show markets itself as a parody and dark comedy, but it has a hard time creating a continuous mix of these elements. The show often switches from dark mystery to parody to comedy. The most compelling times were when it focused on the mystery and threw out the comedy.

Even with Bell’s excellent delivery of comedic moments, not everything can be found funny. The bad comedy is either in a moment that is too dark to be found funny or too stupid and annoying to laugh.

There were moments where I didn’t feel as though I was forced to laugh, but looking back it feels it was due to the utter silliness and lack of care from the show that I fell into a “what the heck, I guess this is funny” feeling.

Anna as a character was relatable, even though she had an unreliable perspective. Bell playing this role was the highlight of the show, as she brings her own characteristics to the role and embraced the parody nature of the story. However, the underdevelopment with other characters gives the other actors little chance to shine.

There are a lot of instances in the show where we are led to believe one thing through Anna’s perspective with no hints that were meant for just the audiences to then have the show turn around and tell us “no, it’s actually this.” Every time this happened it would pull me out of the show and make me say, “oh this is just lazy writing.”

The power of writing isn’t to tell an audience what is, it’s to show and gradually have it revealed what is, for the audience to figure it out. Maybe it was a part of the parody to have dumb jokes and writing, but these aspects weren’t funny or entertaining.

The end of the show was funny, as I knew about half way there would be little to no more character development and would just end with a big, silly reveal. I was honestly laughing at the show rather than with it.

If you’re looking for a break in rewatching “The Good Place” this long-titled show was a fine, fun and quick binge and if their hopes of a second season come to fruition, I’ll give it a watch for Bell.