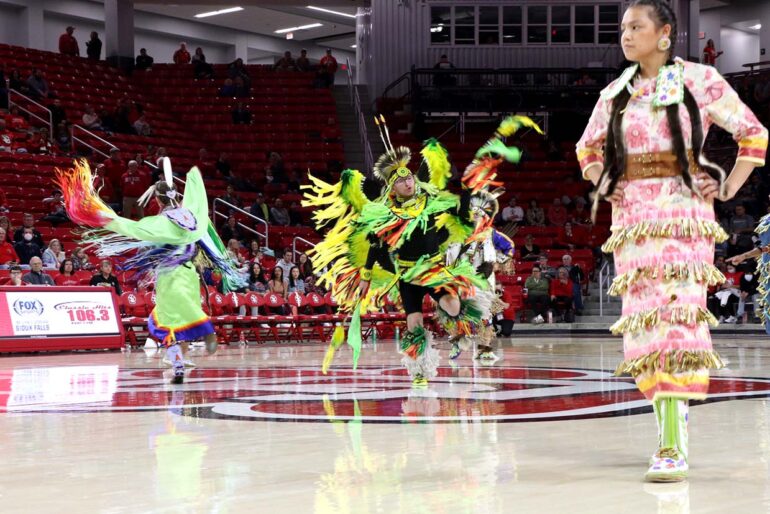 Native American Heritage Day was held in recognition of the nine South Dakota tribal nations with the 11 native athletes on campus at the Dakota Dome on Saturday, Feb. 19, during the men’s basketball game against Western Illinois.

The high schools participating were Crow Creek, Todd County, Red Cloud and Flandreau high school. The students were greeted with an activities fair to see the resources available on campus. They were able to listen and ask questions at the student panel with the admission counselor Tse Chi “Chad,” native students and athletes on campus.

Freshman Trinity Redday is the chair of Tiospaye Student Council and was one of the students highlighting her experiences on campus.

“My first tour here was in March. The Native American Cultural Center is a good place. It feels like a home away from home. That’s what sold it for me.” said Redday.

Colette Jade, a graduate student on the panel, discussed her history at USD, including her involvement with the Native American Cultural Center (NACC) and the importance of staying involved. She said the NACC was her community that she found on campus.

“I think a big part of coming to college, especially for first generation students, is to find a way to build or find a community here or a support base or foundation. It helps you find your grounding here and you have a support system for when school gets tough,” Jade said.

After the panel, the visiting students and alumni were seated in the same section at the basketball game. Before the start of the National Anthem, the Lakota Honor Song was sung by some of the native students on campus and the alumni drum group. This was followed with the Lakota Flag Song, originally composed and created by Ellis Chips who is a member of the Oglala Lakota Nation. The song was to honor the thousands of native veterans returning home from World War II.

Junior guard Mason Archambault was given his tribal flag to wear around him in honor of his tribe Standing Rock while the national songs were being performed.

At halftime, the six native students who were attending lined up on the court to be recognized with their families. The five athletes who were unable to attend due to sports conflicts, put together a video prior to the event stating their name and tribe. The video was shown on the screen while all the Native American student athletes were being recognized.

The drum group of alumni and native students were playing Intertribal Song while student and alumni men and women fancy dancers and women’s jingles were on the court performing a native traditional dance.

With an attendance of over 600 Native American students, alumni and friends, Red Shirt-Shaw said she was excited with how the event turned out.

“I felt a tremendous amount of pride…seeing how much everybody came together and showed up and showed out, it was an amazing day,” Red Shirt-Shaw said.

Red Shirt-Shaw said she hopes the event will bring more Native American students to campus and having this event become an annual one to bring recognition to the Native American athletes attending the university in the upcoming years.

The NACC will be hosting the 10th Annual Alumni dinner on April 1. Then the 48th Annual Wacipi powwow on April 2 and 3 with students and alumni attending both events.