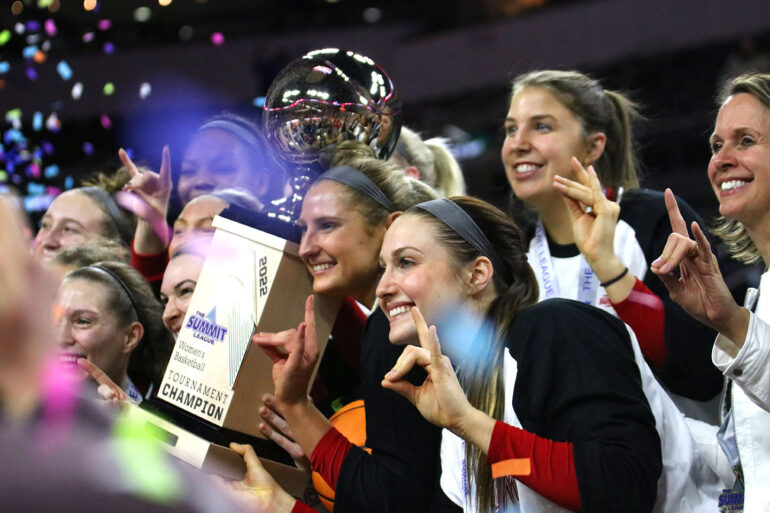 The Coyotes came out victorious in the final round of the Summit League Tournament over in-state rivals South Dakota State (SDSU) and were named Summit League Champions.

“Our ladies played with an incredible amount of toughness and fearlessness,” head coach Dawn Plitzuweit said. “SDSU is a great basketball team and somehow we were able to slow them down. It came down to making some big plays, and our young ladies were able to do that.”

By the end of the first quarter, SDSU led by two with a score of 10-8. Half of the Jackrabbits’ points came from senior guard Tylee Irwin. For the Coyotes, senior center Hannah Sjerven led in scoring with six of the team’s combined eight points.

The second quarter began with a tie after a made layup by Sjerven. The Coyotes and Jackrabbits then went back and forth, causing seven lead changes. USD ultimately ended the half up by one point with a score of 23-22.

The Jackrabbits were held to nine points in the fourth quarter, compared to the Coyotes’ 13. With 0.21 left in the contest, the Coyotes saw their biggest lead of the day with 13 points, which was cut to 11 by Irwin’s made layup to make the final score 56-45.

Sjerven led the Coyotes in scoring with 19 points on the day. She also amounted 10 rebounds and two steals. Following Sjerven in points was Lamb with 17 and Korngable with 11.

“I don’t want to put a ceiling on what we’re trying to do,” Sjerven said. “Obviously in every game we want to go out there and compete and play at our highest level. I think for us, it’s just about being focused on us and fixing the mistakes that we did make even though we did win today.”

Apr 25th, 202255
Before sophomore Sara Reifenrath was a Summit League champion, she was a volleyball and track...
Sports

Apr 25th, 202229
Sophomore health sciences major Stella Fairbanks had a productive diving season after she was named the...
Softball

Apr 25th, 202210
The Coyote softball team got their conference season started over the weekend, taking two of three games...
May 10th 12:47 PM
Campus