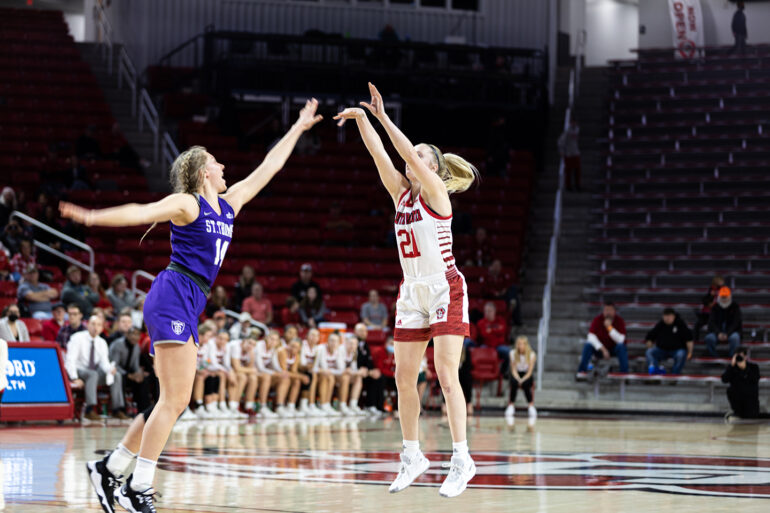 With the season nearing an end, the USD women’s basketball team closed out both of their final regular-season home games with wins.

The USD women beat the third-ranked Kansas City on Feb. 24 with a score of 71-49. The Coyotes then defeated Oral Roberts the following Saturday by outscoring the Golden Eagles 78-49.

On Thursday, senior guard Liv Korngable reached a milestone of 1,000 career points after scoring ten points against the Roos. South Dakota’s defense was able to keep Kansas City’s offense to single digits in both the second and third quarters.

Senior center Hannah Sjerven led the Coyotes’ offense with 22 points in the game, shooting 9-for-11, followed closely behind by senior guard Chloe Lamb who put up 18 points. The Coyotes had twice as many steals as the Roos while also allowing five fewer turnovers. USD led the score throughout the game, creating a margin of 27 points during part of the game.

The Sanford Coyotes Sports Center (SCSC) hosted a senior day ceremony on Feb. 26 ahead of the women’s game against Oral Roberts. Before tip-off, four USD seniors were celebrated including Sjerven, Lamb, Korngable and forward Regan Sankey.

The Coyotes’ final game was a rescheduled away game against Western Illinois on Feb.28. This game helped decide whether the Coyotes would get the one-seed over South Dakota State.

USD took down the Leathernecks 75-48. With this win, the Coyotes share the regular season title with in-state-rival South Dakota State.

The Coyotes’ big three, Lamb, Korngable and Sjerven scored 62 of the 75 points. Sjerven also grabbed 14 rebounds and poked away three steals. Watson grabbed 10 rebounds and a steal for the Coyotes.

For the Leathernecks, they were led by senior guard Elizabeth Lutz who had 12 points, seven rebounds and five assists which were all team highs.

Western Illinois and USD will have a rematch in the first round of the Summit League Tournament on March 5 at 3 p.m.