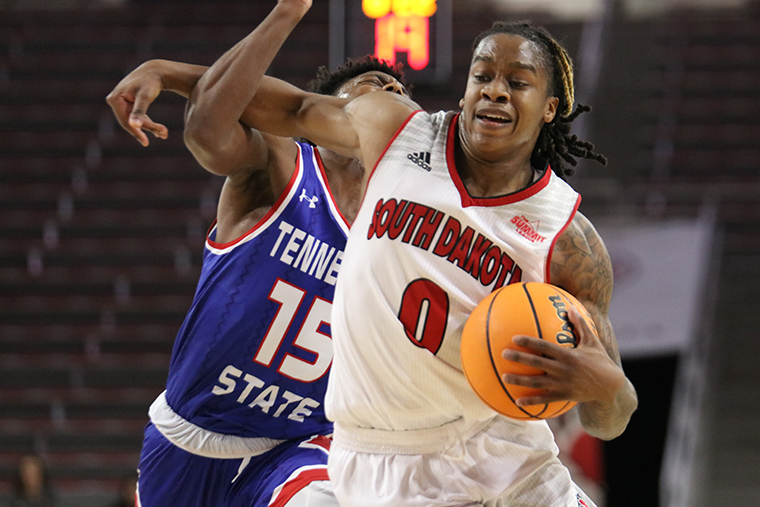 The Summit League men’s basketball regular season has come to an end. The next goal for eight of the teams will be winning the Summit League Tournament at the Denny Sanford Premier Center in Sioux Fall, SD.

The Jackrabbits come into the tournament with an undefeated Summit League record and receiving votes in the AP Poll. South Dakota State (SDSU) is led by sophomore guard Baylor Scheierman and senior forward Douglas Wilson. They are the team’s leading scorers with 16.2 and 16.0 points per game (ppg), respectively. Scheierman is the leading rebounder in the Summit League with 8.2 per game. SDSU also has one of the top scoring offenses in the nation, scoring 87.2 points per game, which is only preceded by Gonzaga.

Omaha’s record is tied with Summit League newcomer St. Thomas, but the Tommies cannot play in the tournament due to them making a jump from Division III to Division I. The Mavericks are led by freshman forward Frankie Fidler. Fidler is the leading scorer for the Mavericks with 12.1 points per game.

The two teams met twice this season with the Jackrabbits taking both games 95-86 and 82-61.

North Dakota State (NDSU) won eight of their last nine games to finish their regular season helping them secure the second seed. The Bison are led by senior forward Rocky Kreuser and junior guard/forward Sam Griesel. Kreuser is averaging 15.8 points per game and 8 rebounds per game while Griesel is averaging 13.5 points and 6.4 rebounds.

The Pioneers came in on a two-game winning streak which helped them jump Omaha and capture the seventh seed. Junior guard KJ Hunt is the Pioneers’ leading scorer with 15.1 points per game, which is eighth in the Summit League. Denver is the second leading team in blocks for the conference with 3.45 per game.

Oral Roberts dropped their final two home games to the South Dakota schools with an overtime loss to SDSU and a 92-87 loss to the Coyotes. They did however have two wins over Kansas City which gave them the three seed in the tournament. Junior guard Max Abmas is the Summit League reigning Player of the Year. Abmas is averaging 22.7 points per game, making him the leader in scoring for the Summit League. Just like SDSU, the Golden Eagles sit high in the NCAA rankings in regard to points per game. They are currently sitting at fourth with an average of 83.8 points.

As for the Leathernecks, they are led by graduate student forward Will Carius and junior guard Trenton Massner. Massner is the third leading scorer in the Summit League with 16.4 points per game and the seventh leading rebounder with 6.4 rebounds.

When the two teams met this season, they split the series with Oral Roberts winning the first match 87-86. Western Illinois’ graduate student Luka Barisic missed a jumper with two seconds left on the clock which gave the Golden Eagles the win. As for the second game, the Leathernecks got the win with a final score of 90-85. The Leathernecks led by 25 points during one section of the game.

Kansas City went eight and three in their last 11 games of the season only losing to SDSU, Oral Roberts and Omaha. The Roos’ graduate students Even Gilyard II, Arkel Lamar and Marvin Nesbitt Jr. along with junior forward Josiah Allick all scored in double-digits. They are averaging 16.9, 13.6, 12.2 and 13.1 points per game, respectively. Gilyard is the second leading scorer in the Summit League this season with 16.9 points.

As for the Coyotes, they are led by sophomore guard Kruz Perrott-Hunt and junior guard Mason Archambault who are the leading scorers with 15.0 and 14.7 points per game, respectively. Perrott-Hunt is the ninth leading scorer in the Summit League and Archambault is three spots behind in twelfth. Archambault has moved up to second in the nation in free-throw percentage with 92.59%.

These teams met twice and both times the Roos finished on top, beating the Coyotes by nine points in both games.