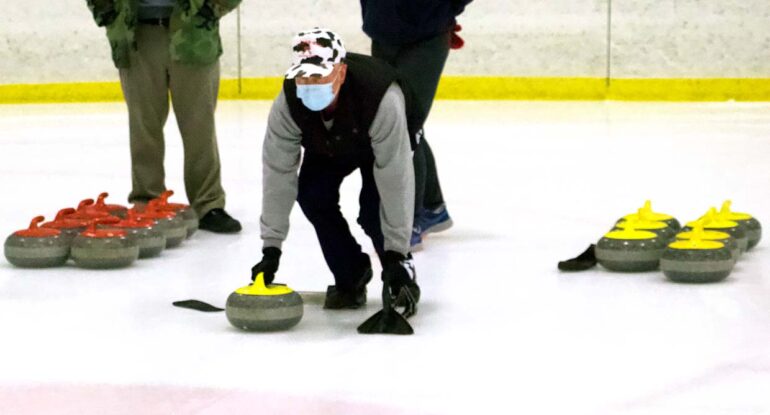 The Yankton Curling Club hosted a Learn-to-Curl and Open Curling event Sunday afternoon at the Yankton Ice Arena, hoping to grow the sport and give the Yankton and area communities something to try.

Curling is a sport on ice for all ages, Yankton Curling Club President Julianna Ford said. Multiple generations of a family can play together.

“My favorite thing is that four generations of a family can play on a team,” Ford said. “I have my small children, myself and (my) parents, and if they had their great grandparents around, they could play as well.”

The club hosts leagues each weekend during the winter months, and will host tournaments and other events like the Learn-to-Curl events periodically. The Learn-to-Curl event is an opportunity for members of the public to learn the basics of how to play and get the chance to play a game of curling in the afternoon.

“I say to come out and try it,” Ford said. “You don’t have to be the best, we have people of all shapes and sizes, anywhere from (ages) eight to 100 can play. We have adaptable equipment so you don’t have to get down on the ice.”

The basics of throwing a stone and sweeping are taught on the four lanes inside the Yankton Ice Arena, then teams are divided and they are taught the basics of a game and get the chance to play a game.

Tim Muller, the coach of the 2014 U.S. Men’s Curling Team at the Sochi Olympics, was also in attendance Sunday to help members of the Yankton community learn the sport he loves.

“Have fun,” Muller said. “If you watched any of the Olympics, you saw John Schuster and those guys had fun on the ice, even if they were down on the scoreboard, but it’s all about having fun.”

Team Schuster, who saw two new faces, Matt Hamilton and Tyler George, won the 2018 Gold Medal at the PyeongChang Olympics. Schuster was also the flag bearer at the opening ceremonies this year at the Beijing Games in 2022.

“It was great to see them at that pinnacle up on the podium. It’s an experience just to be at the Olympics,” Muller said. “I had the opportunity to go through the opening and closing ceremonies and just to stand under the ramp waiting to go up there and the flag bearer starts waving the stars and stripes and everybody chants, ‘USA, USA’ as we walk into the Sochi Arena. I still get goosebumps talking about it.”

Muller works for HM Radiators, which has a manufacturing plant in Yankton, and when he heard of a curling club starting in Yankton, he offered his help.

“When I heard Yankton was trying to get a curling club going, I volunteered right away to come down and do whatever I could to help them out,” Muller said.

The Yankton Curling Club hosted it’s final Learn-to-Curl Sunday, but the public is welcome to watch the league play Saturday nights and the club will bring the Learn-to-Curl events back when the next season starts in October. Muller is looking forward to continuing to see curling grow across the country.