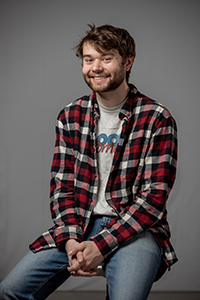 You know what I hate more than almost anything in the world? That thing South Dakota businesses do where they’ll have a set of double doors leading into the building and they’ll lock one of them. why? You’ll be having a good day, walking up to get some ice cream or batteries or gift cards or something, and then bam—day ruined, hopes dashed, life falls apart, all because you made the mistake of trying to open the wrong door.

The only rationale behind the decision to keep one door locked that I can think of is that if both doors were open and it was windy out, the wind could blow into the building more strongly. It’s a pretty weak reason, especially considering a lot of the businesses that do it, like restaurants, tend to have two sets of doors anyway.

I’ve made two crucial observations about this phenomenon. First, it’s always the left door that’s locked, relative to how one enters the business (it’s the right one when you exit, ‘cause that’s how opposites work). I’m assuming the right door is unlocked because traffic (both of the vehicular and foot varieties) seems to prefer the right side in America.

Here, however, they don’t even give you the option to use the left door, so if you happen to be going in as someone’s leaving, you have to do an awkward shuffle around them. It’s like if we closed all left driving lanes everywhere and instead of having clear, defined lines to prevent us from crashing into one another, we just prayed the whole time.

Second, I noticed it happens far more in West River than in East River. I grew up in West River, and while I’ll always maintain its supremacy over East River despite being kinda crap, it is undeniable that West River folks are more likely to do the door locking thing. For a place already as deeply flawed as West River (with its crumbling infrastructure), locking one door is the icing on the cake.

Now that I think about it, why am I being so negative? Maybe I should embrace my heritage. If I ever own a business with a set of double doors, I swear to you, one of them will always be locked.