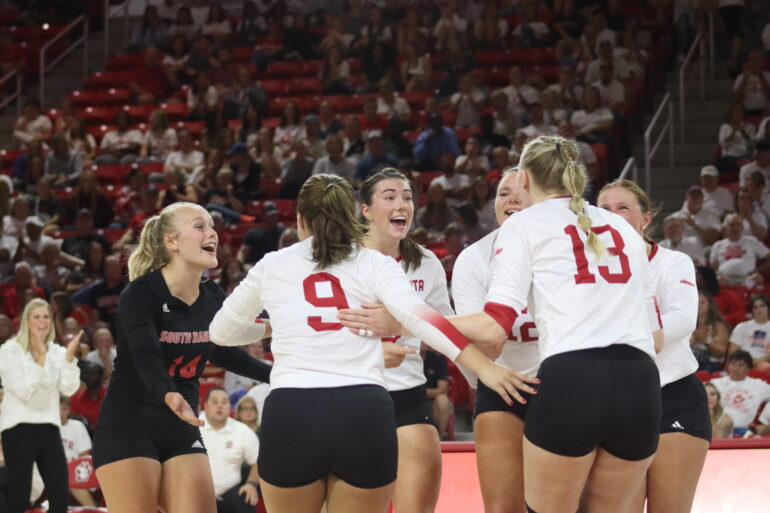 The Coyotes kicked off their 2022 campaign by hosting the Coyote Invitational inside the Sanford Coyote Sports Center (SCSC). They brought in teams Missouri, Northern Kentucky and No. 4 Louisville.

South Dakota’s first game was their annual white-out against Louisville on Aug. 26. In this game, the South Dakota fans broke the single game volleyball record for attendance with 2774 people in the stands.

“Seeing and hearing the students getting into it and the excitement that was brought out with good plays by us was incredible,” South Dakota head volleyball coach Leanne Williamson said. “I caught myself smiling just because of how amazing it was.”

Junior outside hitter Elizabeth Juhnke led the match in kills with 15 on the night. She also had two assists, one block and eight digs. Junior middle blocker Madison Harms followed Junhke in kills with six. Harms also led the team in total blocks with three.

As for the Cardinals, redshirt senior opposite side hitter Aiko Jones and junior outside hitter Anna Debeer led the team with 10 kills each. Jones also had six total blocks and four service aces making her responsible for 17.5 of Louisville’s points.

The following day the Coyotes took on Northern Kentucky.. The Norse record in the tournament prior to meeting with the Coyotes was 0-2, losing to both Louisville and Missouri.

Last season, the Norse beat the Coyotes in three sets during the Cardinal Classic. This time was different as the Coyotes swept Northern Kentucky (25-23, 25-13, 25-23). This was the Coyotes’ first win of the season.

The Coyotes were once again led by Juhnke with 14 kills, one service ace, four blocks and six digs. Senior outside hitter Aimee Adams had the second most kills with seven.

For the Norse, redshirt senior middle blocker Abby Kanarky led them in kills with nine. She contributed 10.5 of the Norse points, also blocking three of the Coyotes’ shots.

The third and final game was a rematch from the Coyotes’ 2020 NCAA Tournament game against the Missouri Tigers. The Tigers have won the last two matches against USD sweeping them in 2020 in the NCAA Tournament and 2021 in the Cardinal Classic.

This win was Williamson 165 for her which made her the all-time career wins leader for South Dakota volleyball.

“I knew she was going to push me,” fifth year senior Lolo Weideman said about Williamson. “She’s not soft, she really pushes us and she will tell us what we need to work on and how to fix things. I think that is what makes our program great.”

The fifth and final set saw the Coyotes get out to an early 5-1 lead. The score then went back and forth until the Coyotes won the final set 15-13. Juhnke and junior outside hitter Evelyn Diederich combined for eight kills in the fifth set.

Diederich also contributed with the second most kills with 13. This was her career high in kills, total attacks (33), digs (6) and points (13).

For the Tigers, sophomore outside hitter Kaylee Cox had a double-double with 18 kills and 13 digs. She also had three service aces, two assists and two total blocks.

The Coyotes finished the Coyote Invitational with a 2-1 record and will be heading to El Paso, Texas to play in the Borderland Invitational. Along with USD, Portland State, New Mexico and UTEP will compete in this tournament.