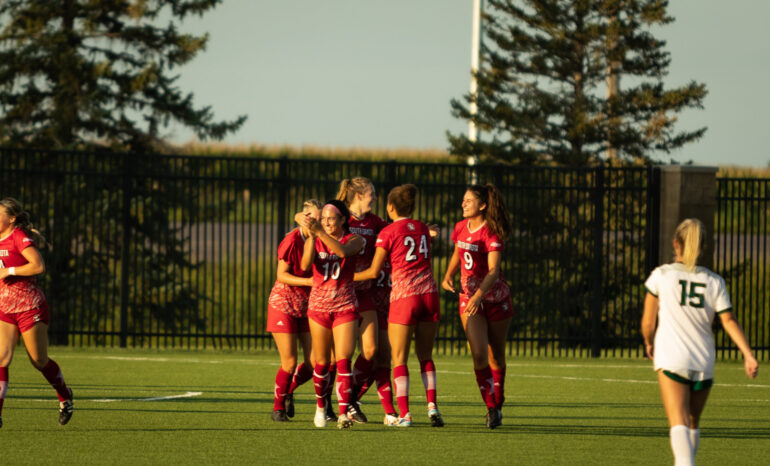 South Dakota soccer got their first win of the 2022 season against Dordt University scoring six goals in the first half and winning the match 8-0.

The Coyotes started their scoring night with a goal from junior defender Taylor Ravelo as she headed in a corner kick from fifth year forward Taylor Cotter at minute eight. This goal was Ravelo’s first of the season and her seventh of her career.

Senior forward Shaylee Gailus also contributed to the Coyotes’ first half scoring as she had an unassisted goal in minute 13.

Cotter put one in the back of the net just a minute and a half after Gailus’ goal. This goal was Cotter’s second of the season which now ties her career best in a season. This goal came off a long pass from junior forward Ashby Johnston as she was awarded with her second assist of the season.

Senior infielder Lexie Wood scored the second goal of her career in minute 19 of the match. Her goal was assisted by Gailus.

South Dakota made two penalty shots at minute 28 and 30 of the game pushing their lead to 6-0 in the first half. The first penalty kick was scored by sophomore forward Haylee Phoenix. This was her first goal of the season and second of her career. The second goal was from Gailus as she finished with two goals in the game.

The Coyotes scored again at minute 80 of the match as junior midfielder Christin Schmidt put in the first goal of her career. This was an unassisted goal.

The final goal for the Coyotes was scored by sophomore midfielder Morgan Sullivan. This was Sullivan’s first game in the Coyote red. She finished with two shots on goal in the game.

South Dakota’s record sits at 1-3-1 as they will head to Cedar City, Utah to take on Southern Utah on Sept. 2 at 5 p.m. These two teams have met twice in school history with the Thunderbirds winning both games.