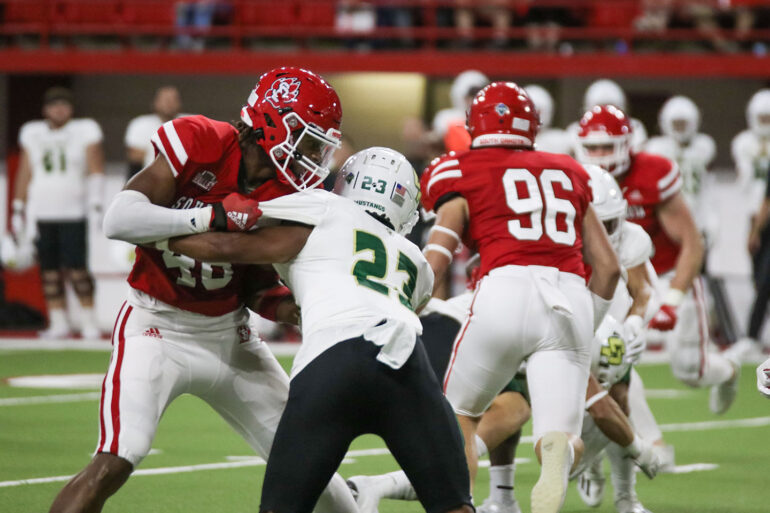 The Coyotes hosted Cal Poly in their first home game of the season on Sept. 17.

South Dakota came into the with an 0-2 record after losing to Kansas State and No. 3 in the FCS Montana.

The Coyotes opened up the game with a 75-yard rushing touchdown from sophomore quarterback Carson Camp. This was Camp’s first of the season.

“I was surprised I scored too. But we had a play concept designed and it didn’t really pan out,” Camp said. “Kind of able to escape the pocket and I was just able to see space from there. I was actually going to run out of bounds but I peeked over and I saw a lot of more open space.”

Following the fumble, Camp put the Coyotes up 14-0 with a 40-yard pass to junior wide receiver Wesley Eliodor. This was Eliodor’s first receiving touchdown and longest caught pass of the season.

The Mustangs scored on the next drive as redshirt junior Spencer Brasch threw a 35-yard touchdown pass to freshman wide receiver Logan Booher.

The Coyotes scored another time before the first quarter ended when Camp threw a screen pass to redshirt freshman Shomari Lawrence who ran it in from for a 46-yard touchdown. The Coyotes led 21-7 going into the second quarter.

Neither team was able to score in the second or third quarters of the game. Both teams combined for four punts, one missed field goal and an interception that was caught by South Dakota’s sophomore defensive back Myles Harden.

USD scored next as Camp threw a slant pass to redshirt freshman Jack Martens who took it into the endzone for a 70-yard touchdown. USD led 28-7.

Cal Poly on the ensuing drive scored a touchdown of their own as Brasch connected with Centers for a 53-yard pass that made the score 28-14.

South Dakota answered back with a touchdown of their own as sophomore running back Travis Theis ran into the endzone for a 19-yard rush. This was Theis’ second touchdown of the season, his first coming in the game against Montana.

Senior kicker Eddie Ogamba scored the last points for South Dakota as he drilled a 21-yard field goal. This was Ogamba’s first made kick of the 2022 season after missing his previous two.

On the final drive out the game, the Mustangs ran out the clock giving USD their first win of the 2022 season with a final score of 38-21.

Camp finished the game with 355-yards and three passing touchdowns and one rushing touchdown.

South Dakota’s record currently sits at 1-2 on the season. Their next game will be back inside the DakotaDome on Sept. 24 against the No. 1 ranked team in the FCS, the North Dakota State Bison.

“It is always easier to build off a win rather than a loss and we’ve got some things we could build on,” head coach Bob Nielson said. “We are going to have to play better both offensively and defensively. We have a different type of opponent next week and we will be better.”