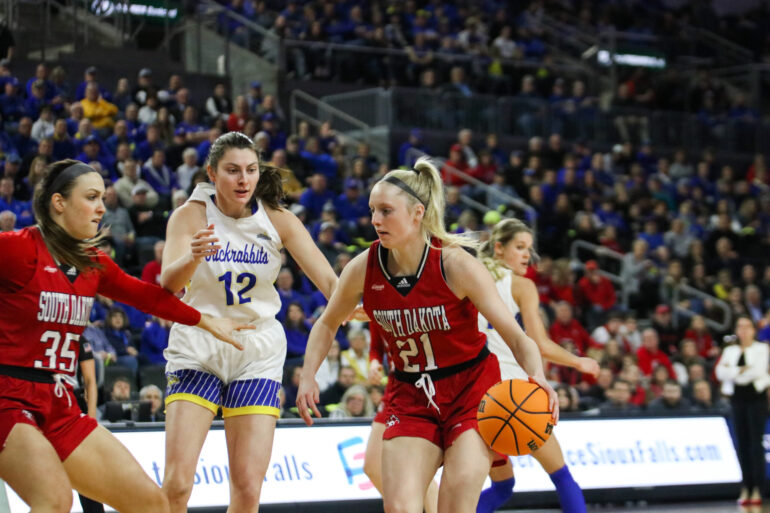 The USD women’s basketball team released their season schedule on Sept. 14 including a non-conference slate which boasts a match-up between two March Madness teams and a tournament in Las Vegas.

The team’s schedule will begin on Nov. 1 with an exhibition game against the South Dakota School of Mines and will follow six days later with their season opener at home against Midland.

They will go on to host Creighton on Nov. 10, a team that saw the Elite Eight in last year’s March Madness, and a team they beat last season 73-71 on the road.

The team will also compete in the Las Vegas Holiday Classic tournament over Thanksgiving which includes USD, Santa Clara and Fordham.

USD will start Summit League play with a match-up against Kansas City on Dec. 19 inside the Sanford Coyote Sports Center.

Head coach Kayla Karius believes the non-conference games will set her team up well to compete against the Summit League teams awaiting them mid-December.

“I think overall it’s going to be a great test…,” Karius said. “We are a new team and to be able to work through things in the non-conference season and really grow and get ready for our conference season will be good.”

For Karius, there isn’t one specific game that she can’t wait for, she just wants to get back out on the court.

“I’m always excited when the season gets going and we have this buzz in the air,” Karius said. “There are fans already telling me how excited they are for the season, so I think I am just looking forward to the first game and starting a new chapter of USD women’s basketball.”

While the team is still in the offseason, Karius believes their opportunity to train together for eight weeks and then travel to Greece to compete this summer has allowed them to grow as a team.

“It was a great chance for us to get a lot of practices in the summer, work on high level basketball and talk about our system and what we want to achieve on defense,” Karius said. “For us to already be in game more that early on, it’s going to bode well for us when the season begins.”

“We really relied on a group of players last year that are no longer with us,” Karius said. “So for us, it is about finding a new identity and having confidence that each player is here for a great reason.”

After former head coach Dawn Plitzuweit left USD towards the end of the school year last year, Karius was welcomed back to Vermillion after being away for four years. While Karius navigates a new basketball team, she is glad the transition back to Vermillion was a seamless transition for her and her family.

“For me and my husband and our son, it was like coming home,” Karius said. “We got to see so many old friends again and it just feels really comfortable and really special.”

As Karius and her team continue to prep for the start of their season, Karius said they can’t wait to get back out there in front of their fans.

“We encourage everybody to come back out this season and get excited about a new group of players,” Karius said. They’re equally as passionate about USD and this fan base and basketball, there’s just going to be a lot of new faces now to learn and start to love.”