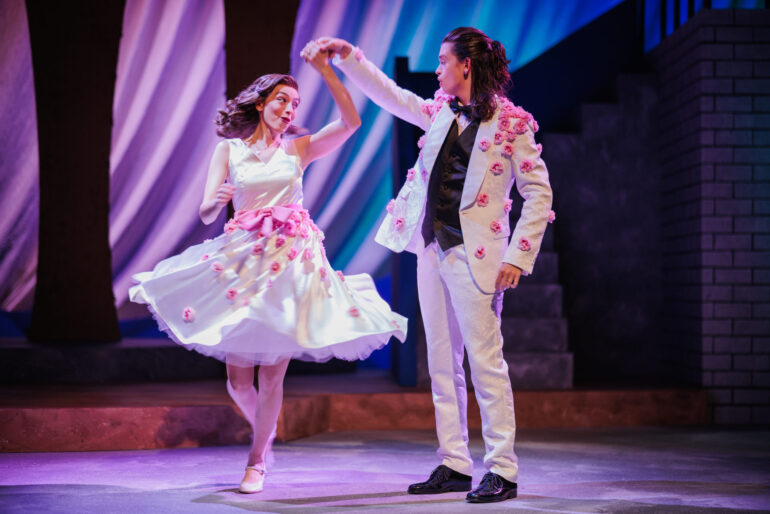 In the first production of the year, the Department of Theatre showcased a new adaptation taken on a classic Greek myth.

Eurydice, directed by Jeff Larsen, a master of fine arts directing student, twists the Greek myth Orpheus. Eurydice is told from the perspective of Eurydice, the daughter of Apollo. The play is a tragicomedy following Eurydice’s adventures in the underworld.

While traveling through the underworld, Eurydice met multiple characters, including the stones.

“We live in the underworld with dead people and are like the police of the underworld, we try to keep order as best we can,” Von Rentzell said.

Von Rentzell was one of three stones in the play, along with Loud Stone and Little Stone, who worked together under the lord of the underworld, Hades. Von Rentzell said this dynamic helped him to build character.

“Sometimes it’s hard to stay involved and active in the scene, but as a group, the three of us really feed off each other well,” Von Rentzell said.

One of the reasons Von Rentzell enjoyed this play was because of the message.

Von Rentzell said acting in Eurydice was his first time being on a big stage, like the Knudson theatre, and it helped him as a performer.

“I really learned to trust myself and my instincts and abilities, and it’s helped me grow a lot as a performer,” Von Rentzell said.

Von Rentzell said a big part of what made Eurydice a good play was the way the cast worked together.

“Creating a fun, safe environment for everyone to explore the characters without judgment and just being free to make mistakes without pulling each other down,” Von Rentzell said.

Another part of what made Eurydice a good play, Von Rentzell said, was the direction he was given.

“[Larsen,] our director, has really given us that space and freedom and really collaborated with us,” Von Rentzell said.

The Department of Theatre’s next production will be the musical Daddy Long Legs, showing from Oct. 13-16.