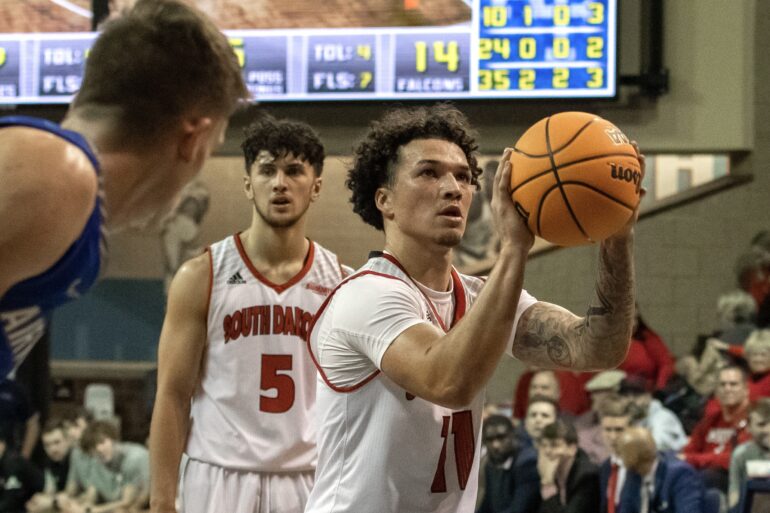 On Oct. 11 the Summit League released the basketball preseason standings along with the players included in the first and second teams. This was voted on by the league’s coaches, sports information directors and select media members.

Both Archambault and Perrott-Hunt ended last season being on the All-Summit League second team.

Perrott-Hunt is coming off his best season as a Coyote where he led the team in scoring with 15 points per game. He also beat out Archambault by one assist to be the team’s leader with 71 total. Perrott-Hunt grabbed a career high in rebounds with 4.1 per game with his previous being 2.8.

Before Plitzuweit’s injury in 2020-21 which caused him to miss the entirety of the season, he was named to the All-Summit League First-Team and the Summit League Newcomer of the Year. Plitzuweit averaged 19 points per game that season along with dishing out a team high of 3.9 assists per game.

On the women’s Preseason Poll, sophomore guard Grace Larkins is the only Coyote on the list.

Larkins was named the Sixth Women of the Year as she averaged 6.5 points per game, 2.7 rebounds per game and 34 steals. Larkins was the fifth leading scorer on the Coyotes squad behind seniors Chloe Lamb (Summit League Player of the Year), Hannah Sjerven (Defensive Player of the Year/Summit League First Team), Liv Kornagable (Summit League Second Team) and redshirt freshman Maddie Krull. Larkins helped the Coyote team last season reach the NCAA Sweet 16 in which they lost to the No. 3 Michigan Wolverines.