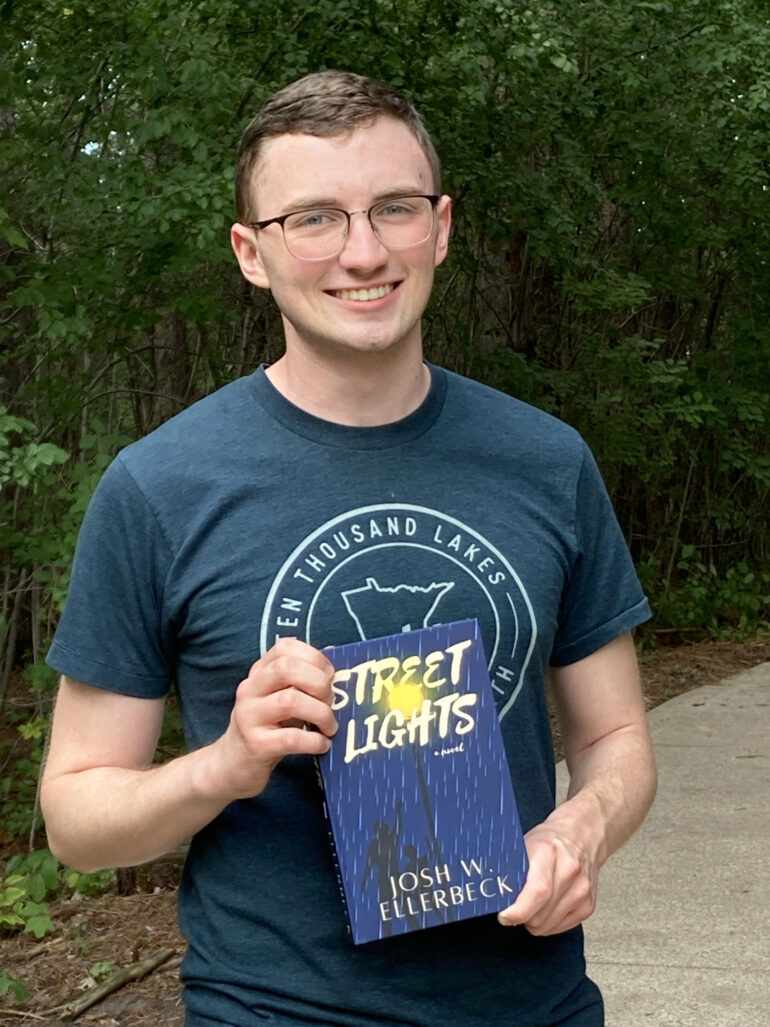 Even with all his classes, Josh Ellerbeck made time to pursue his lifelong passion, writing. Ellerbeck, a junior communication studies major, recently self-published his third book, “Street Lights,” the first novel in a two-part series.

Since his childhood years, Ellerbeck has always enjoyed writing. He created his first series in elementary school and shared it with his class where he was met with positive feedback. This experience has led Ellerbeck to make his passion for writing a reality.

“I know I’ve always enjoyed writing, but once I could feel more in touch with my passion for writing, it started to take off,” Ellerbeck said.

After his junior year of high school, Ellerbeck started writing on a blank Microsoft Word document. He said he couldn’t stop until he realized his book was over 400 pages long.

His first self-published book, “When Stars Leave The Sky,” was released in 2019. This book addressed the issue of eating disorders, specifically in males, and the stigmas that surround this problem. Ellerbeck hoped once people finished his book, they would feel more confident in themselves.

His second self-published book, “The Glory Days,” was published in 2020. Ellerbeck wrote this story around the concept of school shootings. This book took longer for him to write as he said it was a tougher subject to address.

“I felt called to write about it and be more empathetic with the people struggling with this. I feel it’s important for people to take the issues head-on instead of hiding from it,” Ellerbeck said.

Ellerbeck’s latest self-published book, “Street Lights,” addresses Huntington’s disease. Since this topic isn’t discussed much, Ellerbeck wanted to write about it to help people better understand the seriousness behind the disease.

“Huntington’s disease is basically ALS, Parkinson’s and Alzheimer’s all combined into one. Since it is a serious disease, I am hoping to share more information about it,” Ellerbeck said.

After doing research, he wanted to write this book with one main question in mind; “How does someone continue on with their purpose in life when diagnosed with Huntington’s?”

Ellerbeck’s biggest goal when writing this book was to create more awareness of the disease and help those with mental health, especially when relating to this experience. He hopes this book reaches a wide audience.

“I think it would be interesting to meet someone in the Huntington’s community through this book. Even though I don’t have a personal connection to the disease, I would like to show my support,” Ellerbeck said.

In order to show his support to the community, Ellerbeck is donating one-third of his earnings to the Huntington’s Disease Society of America (HDSA). HDSA provides support, resources and programs to anyone impacted by the disease.

Part of the writing process included creating a title and book cover, and Ellerbeck said he chose to do all of this himself. In “Street Lights,” Ellerbeck said the title has a connection to a moment in a specific chapter, which is the same for the book cover.

Publishing the book is another part of the process Ellerbeck chose to do himself. He said it is more cost-effective to self-publish, especially for a college student. He also enjoys it because it gives him more freedom.

Ellerbeck said he enjoys writing books and plans to continue publishing books throughout his life. Right now, it’s more of a side hustle, but in the future, he is hoping to make it his main focus.

“As I continue as an author, I hold myself to a higher standard as I continue to grow in this profession. My dream is that one day I’ll be a professionally published author,” Ellerbeck said.

Ellerbeck’s books are currently on Amazon in paperback, hardcover or ebook editions, and Ellerbeck plans for the sequel to “Street Lights” to come out sometime next year.