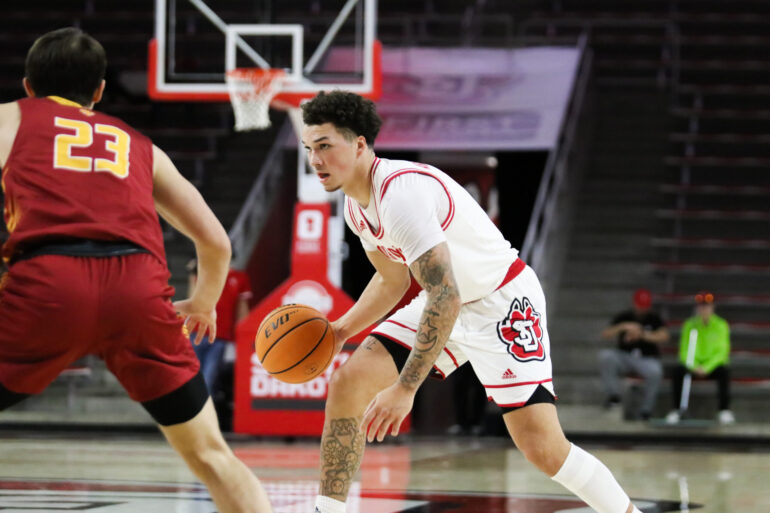 The Coyotes opened up their 2022-23 season with an exhibition game against Division-3 school Simpson College. This game did not count towards either team’s overall record.

The Coyotes went into halftime with a 46-32 lead over the Storm with Perrott-Hunt as their leading scorer with 14.

In the second half, the Storm were unable to score until the 16:21 mark which led to the Coyotes gaining a 24 point lead during that time.

The Coyotes scored 55 points in the second half to lead them to their 101-55 victory. The Storm only scored 23.

South Dakota finished the game shooting 55.1 percent from field goal range and draining 11 of their 22 three point attempts. The Coyotes also shot 14 for 20 from the free throw line.

As for the Storm, they shot 35 percent from field goal and 16.7 percent from behind the arc only making four of their 24 attempts.

Thirteen of the 14 Coyotes that checked into the game scored points for USD. The only player to not do so was freshman guard Cade Kandolin.

South Dakota’s leading scorer was Perrott-Hunt as he finished with 24 points and made four of his eight three point shots. He also had five rebounds and four assists. Kamateros was second with 13 and freshman forward Jevon Hill finished the game with 11 after making three threes in a row.

As for the Storm, senior guard Buck Eagleburger was their leading scorer as he put four of his six shots in for 13 points in the contest. He also made four free throws, grabbed five rebounds and shot one for one behind the arc.

The Coyotes’ first official game of the season will be against the Wisconsin Badgers in Madison on Nov. 7.