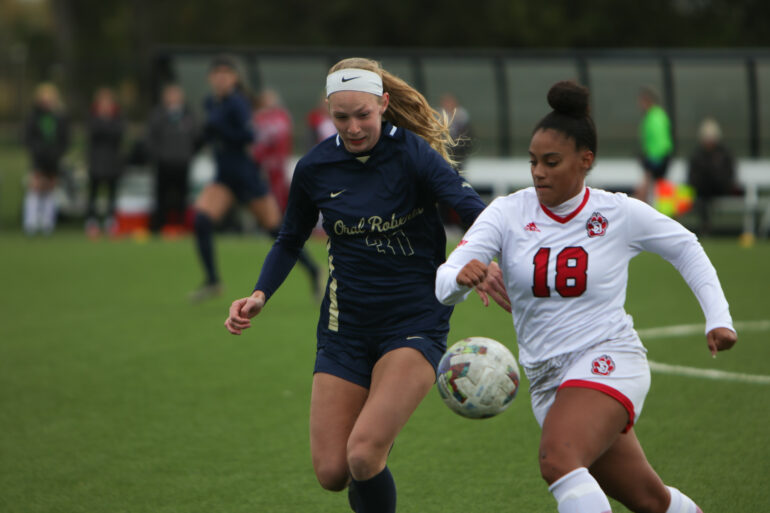 The Coyotes hosted their final two home games on Friday and Sunday. USD had an overall record of 3-6-5 and a Summit League record of 2-1-2 prior to these games.

Neither team was able to score in the first 45 minutes of play. However, both teams combined for nine shots with four of them being on goal.

In the 75th minute, fifth year forward Tiannah Moore received her first yellow card of the year. This was the fifth of her career.

The Roos got on the board first in the 78th minute from junior midfielder Caijah Anderson. This was Anderson’s first goal of the season and she is now the third Roo to score this season.

USD got another yellow card at the 87-minute mark of the match. It was a team yellow.

Both teams had the same amount of shots with 12 and seven on goal. Kansas City outsaved the Coyotes 7-6.

Eight Coyotes were thanked for their play in the red and white including Moore, forwards Taylor Cotter, Joana Zanin, Jordan Centineo, defender Teresa Fontenot and midfielders Lexie Wood and Anna Hossfield. Wood took her senior day a year early due to her father’s upcoming deployment.

The Coyotes opened up the scoring at the 32-minute mark. Senior forward Shaylee Gailus scored her fourth goal of the season and 13th of her career.

The Coyotes went into the second half with a 1-0 lead.

The Golden Eagles came out of the half and scored in the 48th minute when sophomore midfielder Samantha Guzman put a shot in the goal tying the game at one each. This goal was Guzman’s fifth of the season. Senior forward Mia Kitterman was awarded her fifth assist of the year.

The Coyotes got another yellow card this time from Fontenot at the 67th minute of play.

South Dakota’s leading goal scorer Zanin put in her fifth goal of the season at minute 73 and gave the Coyotes the lead 2-1.

Oral Roberts finished the game collecting two yellow cards of their own at minute 75 by freshman midfielder Carson Arne and at minute 83 by Kitterman.

South Dakota won the match 2-1. The Coyotes overall record moves to 4-7-2 and Summit League record to 3-2-2. This currently has them sitting tied for fourth place in the league with the season winding down to the last few games.