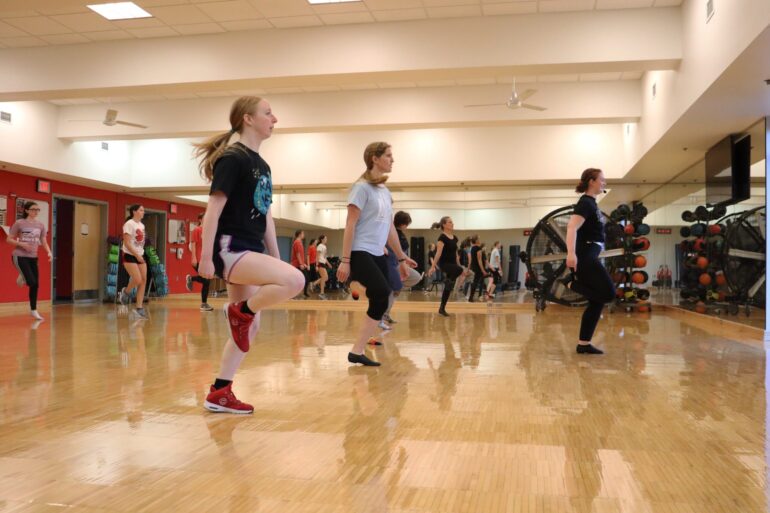 Irish dance classes at the Wellness Center have allowed students to better connect with their roots.

Aiden Fenenga started teaching the class last year during the fall semester. Fenenga was recommended for the position by her sister-in-law, who teaches zumba classes.

“I kind of got volunteered to do it in like the most wonderful way possible,” Fenenga said. “I like Irish dancing because it’s different. Even though it has made me relearn it, I’ve been relearning it with everybody else too.”

Fenenga teaches the class every Wednesday night at the Wellness Center where students can come and learn basic Irish steps needed to jig.

“(Cardio dance, zumba and werk) are all more like hip hop which are different from Irish and they are a follow along type of thing,” Fenenga said. “This one is different because you learn steps and you learn a whole dance. It’s cool and it’s different in that way so people who feel lost, in like zumba or cardio dance, they can work on it and practice it.”

Freshman Calli Barnick joined this dance class a few weeks after moving in. For her, she thought it sounded cool and it would be a good party trick to learn.

“I think other people should join because it is a very relaxed atmosphere and it is a good way to be active with your friends if you aren’t super into the gym scene,” Barnick said. “It is also such a feeling of accomplishment when you remember the routine bit by bit each week.”

Even for returning students, such as senior Morgan Roberts, the dance class is still an enjoyable time and an inviting atmosphere, she said.

“(Fenenga) does such a great job making sure everyone has fun and feels comfortable even if they don’t exactly feel confident in their dancing,” Roberts said. “It is a very nonjudgmental environment and it’s a fun way to get in a bit of movement and take a break from classes every week.”

The Irish dance class offered at the Wellness Center  on Wednesday nights has made memories for students so far, Fenega said.

“Last year two of my students went out to bars on Saint Patrick’s Day and they were doing one of our songs out on the street,” Fenenga said. “They had so much fun and people were like ‘do it again, do it again.’ So I think it’s really fun for people, like on Saint Patrick’s Day, to actually know some Irish steps where you can (dance) to any song.”